The prediction was made in a dramatic weather chart released by MetDesk, which forecast that scorching summer temperatures will well and truly have returned by the week of Monday 24 June. According to the chart, the entire nation will be warmer than usual but the southeast in particular will be ablaze in temperatures 6 degrees Celsius or more above the average. The coolest part of the nation looks to be west Wales, where temperatures will only be one or two degrees above the norm.

France will take the full brunt of the heatwave, boiling in temperatures up to 13 degrees above average.

The uncomfortably hot temperatures will mostly glide past Britain and up into the Netherlands.

Before then, however, the UK faces a week of intense rainfall and localised flooding.

The Met Office warned of flooding and travel disruption with “another wet night to come” on Tuesday, before the UK is battered by another frontal zone on Wednesday. 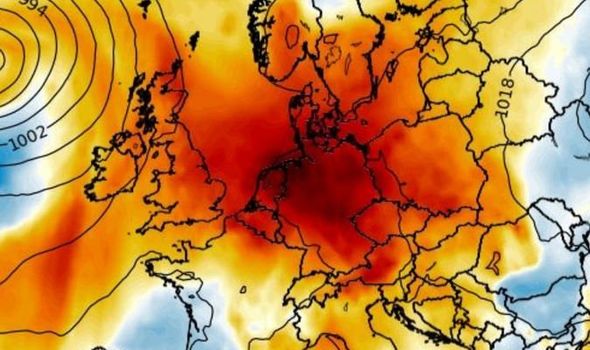 Yellow rain warnings are also in force for parts of England and Wales until midday on Thursday.

The Met Office stated: “Spells of heavy and persistent rain have the potential to bring flooding and disruption to transport in places. There is a small chance that homes and businesses could be flooded, causing damage to some buildings.

“Where flooding occurs, there is a slight chance of delays or cancellations to train and bus services.

“Spray and flooding could lead to difficult driving conditions and some road closures.

“There is a small chance that some communities become cut off by flooded roads.”

For weather conditions overnight and into Wednesday, the Met Office’s Alex Deakin said: “As we go through Tuesday evening it stays wet through central and southern areas, those showers just persisting, quite slow moving at times too, so if you catch one you will certainly know about it.

“The further heavy rain just starts to push its way back in there across Yorkshire, Lincolnshire, into the Midlands and the north-west of England overnight.

“So it is going to be another wet night to come, those warnings always staying in force, even as we head into Wednesday.

“Another frontal zone pushes its way up on Wednesday, giving further very wet and, at times, very windy weather across the same sort of area that has seen the worst of the rain already. So I think we’re going to continue to see some disruption as the week goes on.”