A coronavirus survivor thought to be Britain’s longest-suffering patient has been left vomiting every day.

Jason Kelk, 49, from Leeds, was rushed to hospital with a chest infection last April, which turned out to be Covid.

The primary school IT teacher, who has not left the hospital since, was transferred to intensive care and hooked up to a ventilator just 48 hours later.

But the damage wrought by the virus to his stomach has reportedly left him with gastroparesis, causing him to suffer regular vomiting bouts. He is also still unable to walk unaided. 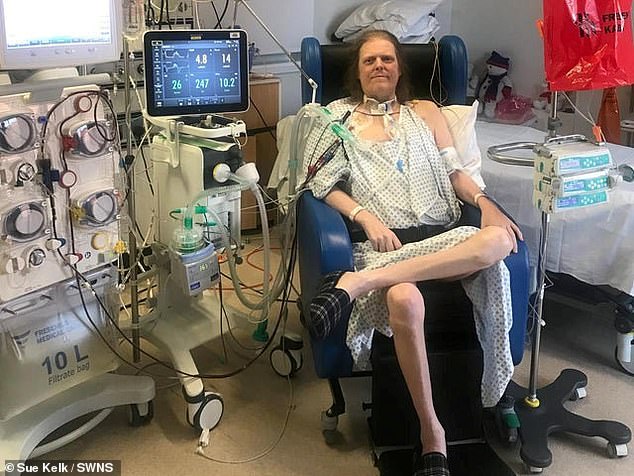 Jason Kelk, 49, has been in Leeds General Infirmary for more than a year. He suffers daily vomiting fits because he suffers gastroparesis, which stops the stomach emptying normally 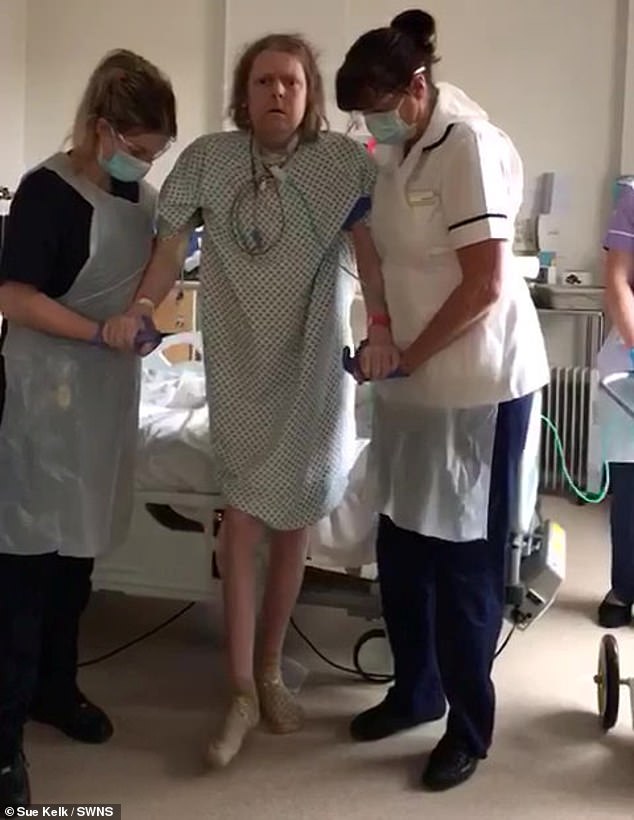 Most coronavirus patients will recover within a fortnight, suffering a fever, cough and losing their sense of smell or taste for several days.

However, evidence is beginning to show that the tell-tale symptoms of the virus can persist for weeks on end in ‘long haulers’ — the term for patients plagued by lasting complications.

Data from the COVID Symptom Study app, by King’s College London and health company Zoe, suggests one in ten people may still have symptoms after three weeks, and some may suffer for months.

For those with more severe disease, Italian researchers who tracked 143 people who had been hospitalised with the disease found almost 90 per cent still had symptoms including fatigue two months after first falling unwell.

The most common complaints were fatigue, a shortness of breath and joint pain – all of which were reported during their battle with the illness.

It is not clear whether he is definitely the longest suffering coronavirus patient in the country, but Leeds Live has given him this title.

A handful of infected patients have been forced to remain in hospital for months, including Kate Garraway’s husband Derek who was only recently discharged.

‘Long Covid’ — which includes breathlessness, brain fog, and muscle pains — strikes around one in ten people who suffer the disease, according to estimates. More severe cases are much rarer.

Mr Kelk’s wife Sue, 63, said he has made ‘huge strides’ over the past two months, with doctors taking him off his ventilator earlier in April.

On a fundraiser website set up to buy a television for his room, Ms Kelk said: ‘He has been off the ventilator for four weeks… but we have an unknown amount of time (until he can come home).

‘Jason still has a tracheostomy (opening in the neck for a ventilator tube) and continues to vomit every day.’

She added to Leeds Live: ‘His kidneys and lungs had almost been completely destroyed and he has developed suspected gastroparesis (when the stomach cannot empty normally).’

NHS England’s website says the condition is sparked by food not emptying properly from the stomach, leading to the vomiting.

They add there is ‘no obvious cause’ for the condition, but it can be linked to complications with surgery and type 2 diabetes, which Mr Kelk suffers from.

But the Yorkshire Evening Post, who interviewed him last month, reported it was linked to the stomach damage from the virus itself.

Studies suggest Covid can also disrupt the digestive system, with some scientists calling on health authorities to recognise diarrhoea as a possible symptom of Covid.

The US-based CDC already considers this as a symptom of Covid, but the NHS still lists only a high temperature, new continuous cough and loss of taste and smell as possible warning signs.

Speaking about her husband, Ms Kelk told Leeds Live: ‘For a very long time, I was always told that it would be a question of if, not when, Jason would return home.

‘Now it’s really looking like him coming home with me is a real possibility — we’re saying when and not if.’

The pair have only been able to see each other a few times while he’s been on the ward because of Covid restrictions.

Mr Kelk suffered from type 2 diabetes and mild asthma before he caught the virus, which put him at higher risk from the disease.

Ms Kelk said she felt about ’10 foot tall’ when he managed to walk with assistance for the first time in February.

‘I’m so proud of him, it really is miraculous to see,’ she said.

‘He’s managed to walk on the spot before and had taken a few steps but this was the first time he’s walked like this. It was quite a long way – about six to 10 metres I think they said.

‘It was a fantastic moment, I was absolutely buzzed.’