Fascinating never-before-seen photos of cowboys in the Wild West have come to light 130 years later.

The early images were taken by a British farmhand and show life on the ranches of Colorado and New Mexico in the US in the 1880s.

One dramatic image captures the thrilling moment a group of cowboys ride towards the camera with hats held aloft.

The unnamed Brit who took the images would have documented his experience using these images which he collated into an album he bought home.

The snaps have been consigned for sale from the deceased estate of a private collector from Surrey, England.

They will go under the hammer with Flints Auctions, of Reading, Berks, who expect them to fetch £500. 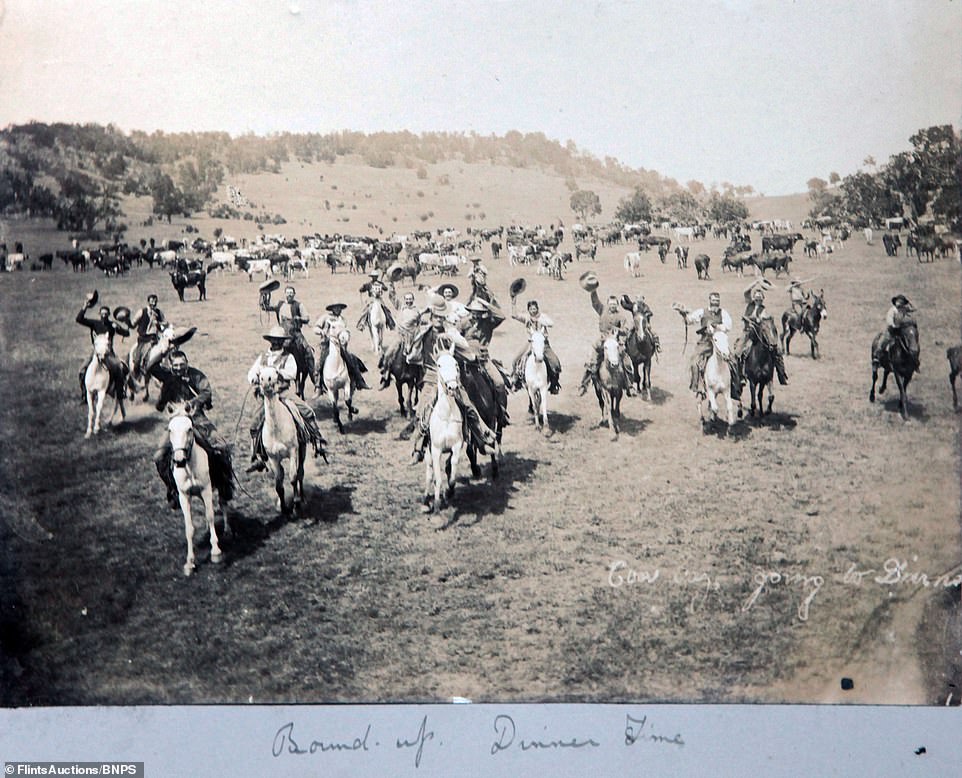 Rawhide: A dramatic image from the previously unseen collection captures the thrilling moment a group of cowboys ride towards the camera with their hats held aloft. The picture was captioned with ‘Round up, Dinner Time’ by the photographer 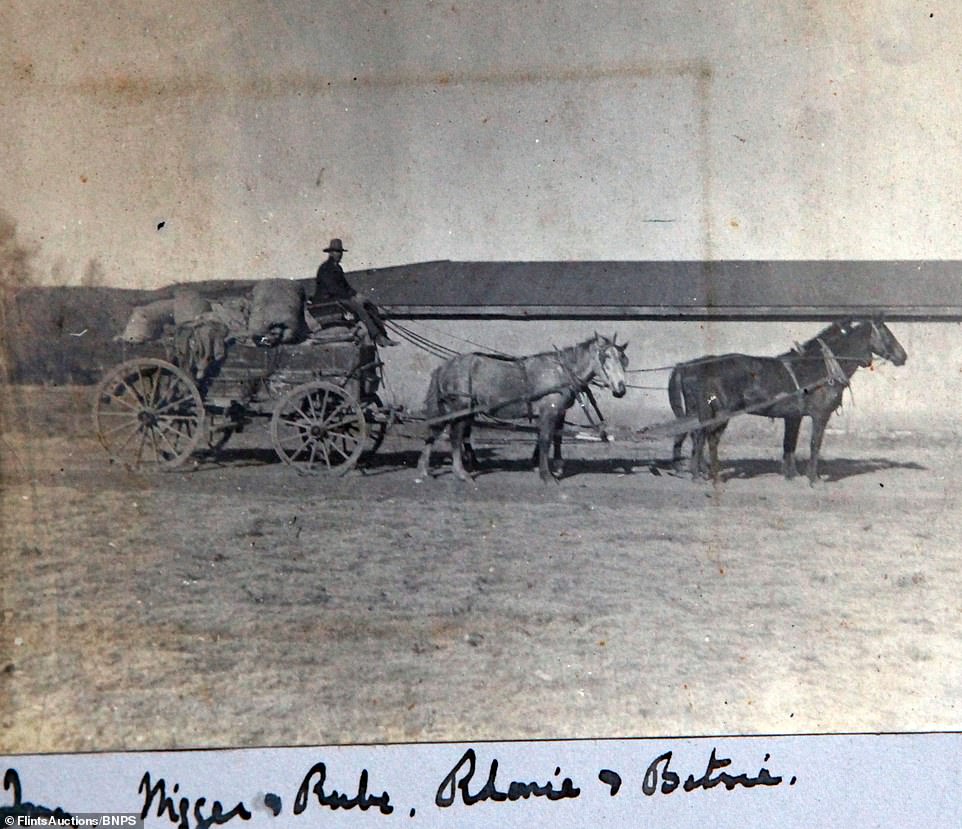 With few roads, wagons were the main transportation method until the advent of the railway. Here a man is seen with two cart horses pulling a wagon 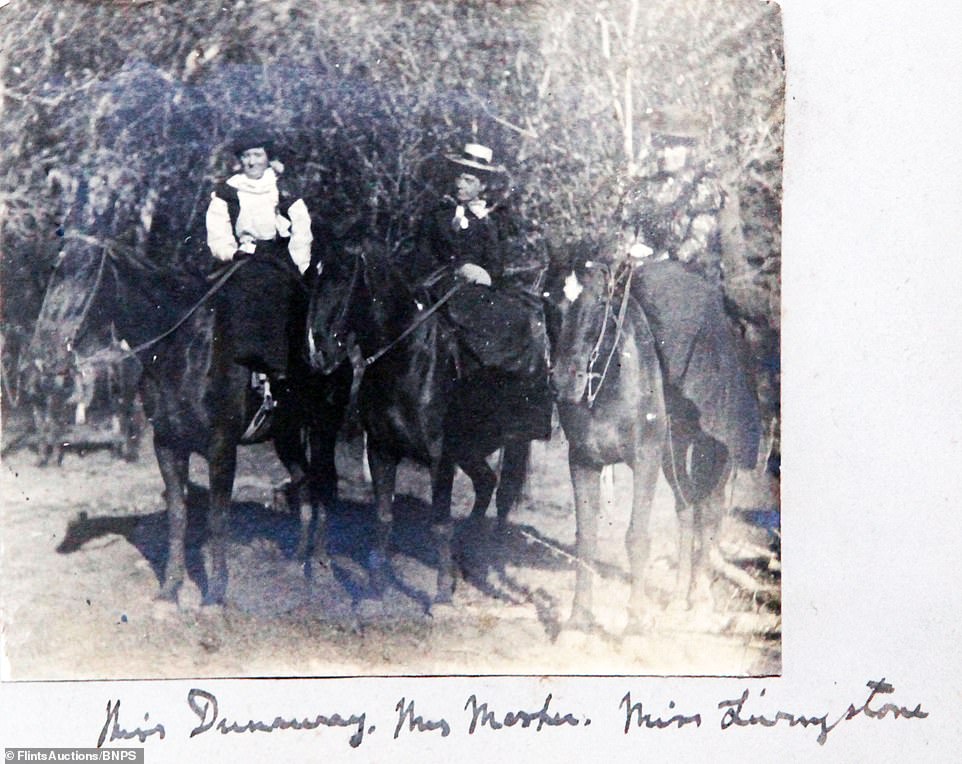 This undated image shows three woman on their horses, with the caption – ‘Miss Dunaway, Mrs Morten and Miss Livingstone’ 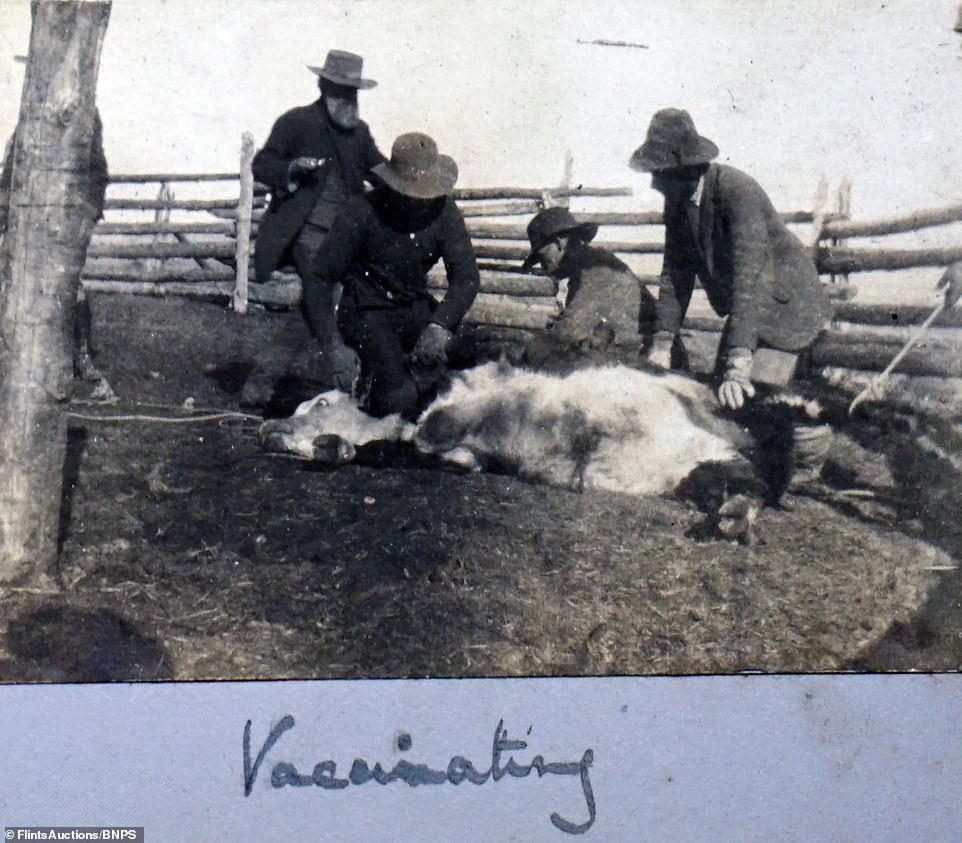 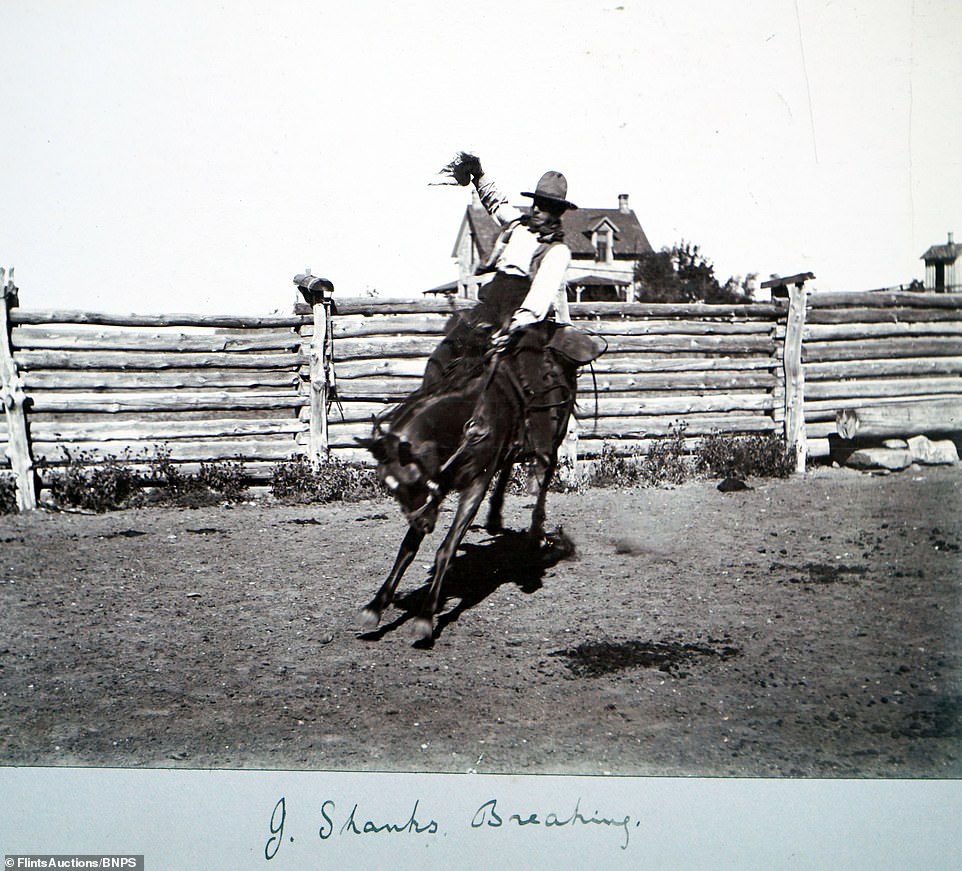 Yeehaw: A man described as ‘G. Shanks’ is pictured breaking a horse on a ranch. While the bulk of the images are believed to have been taken by the farmhand, the album also contains 13 larger prints by a professional photographer of the era, W.A. White 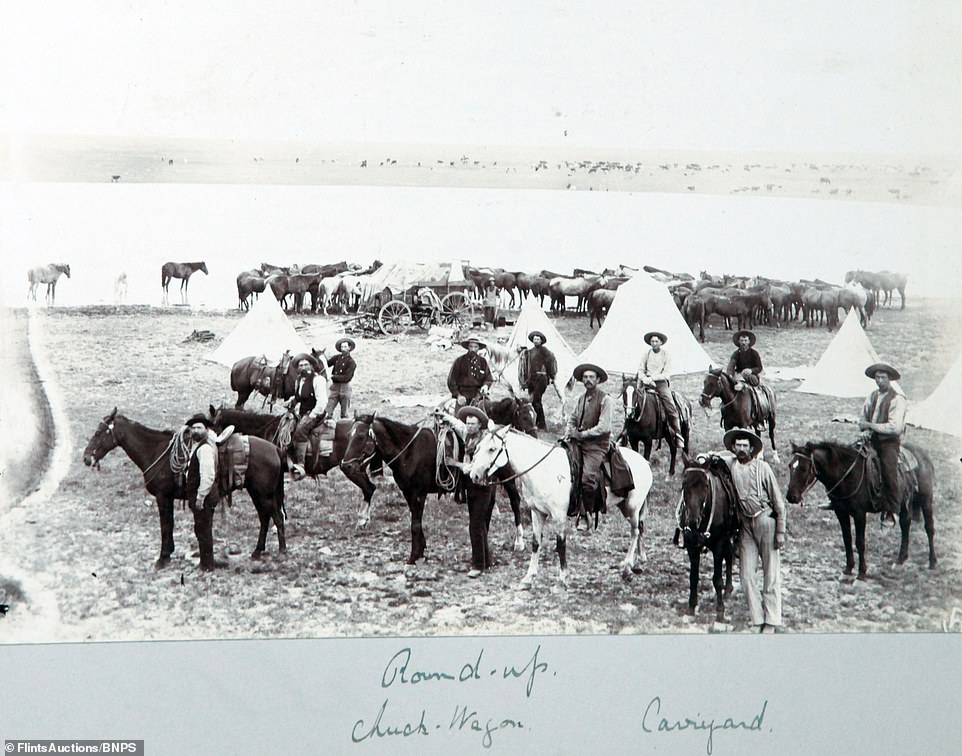 A group of cowboys, some on horses, some dismounted, with tents in the background with horses gathered together. The men face the camera for this picture captioned, ‘Round-up, Chuck wagon’ 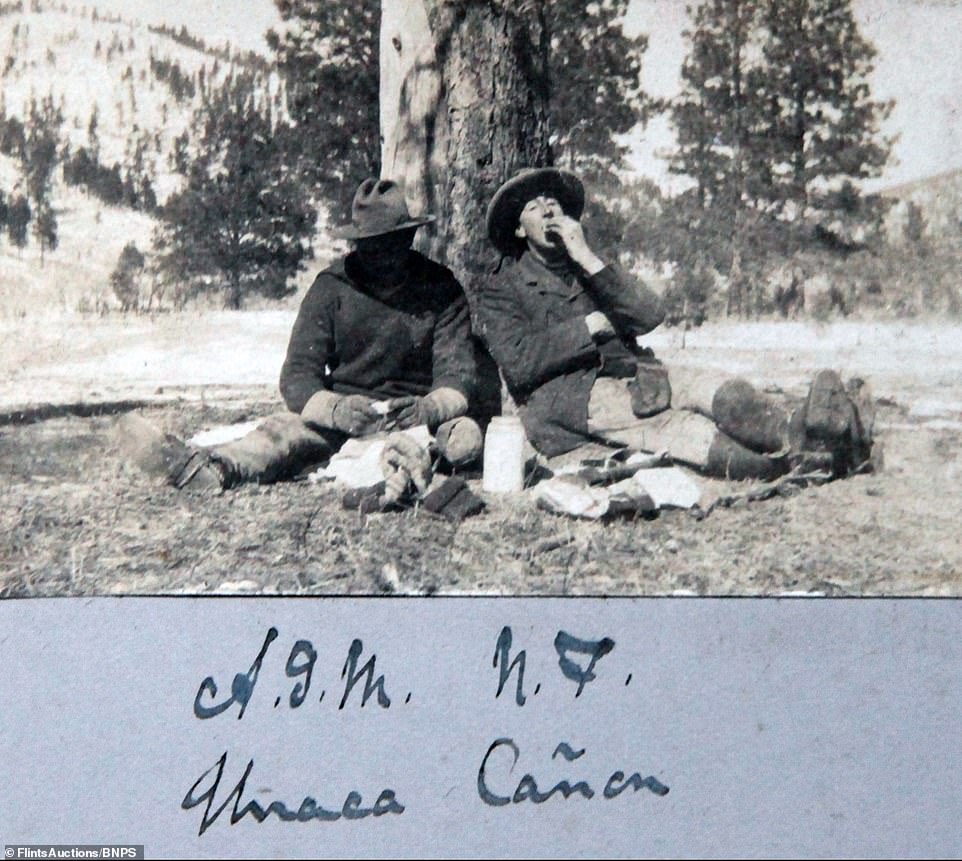 Cowboys having a break in the Urraca Canyon in New Mexico. The two men’s initials maybe the letters written above the location ‘Urraca Canyon’ 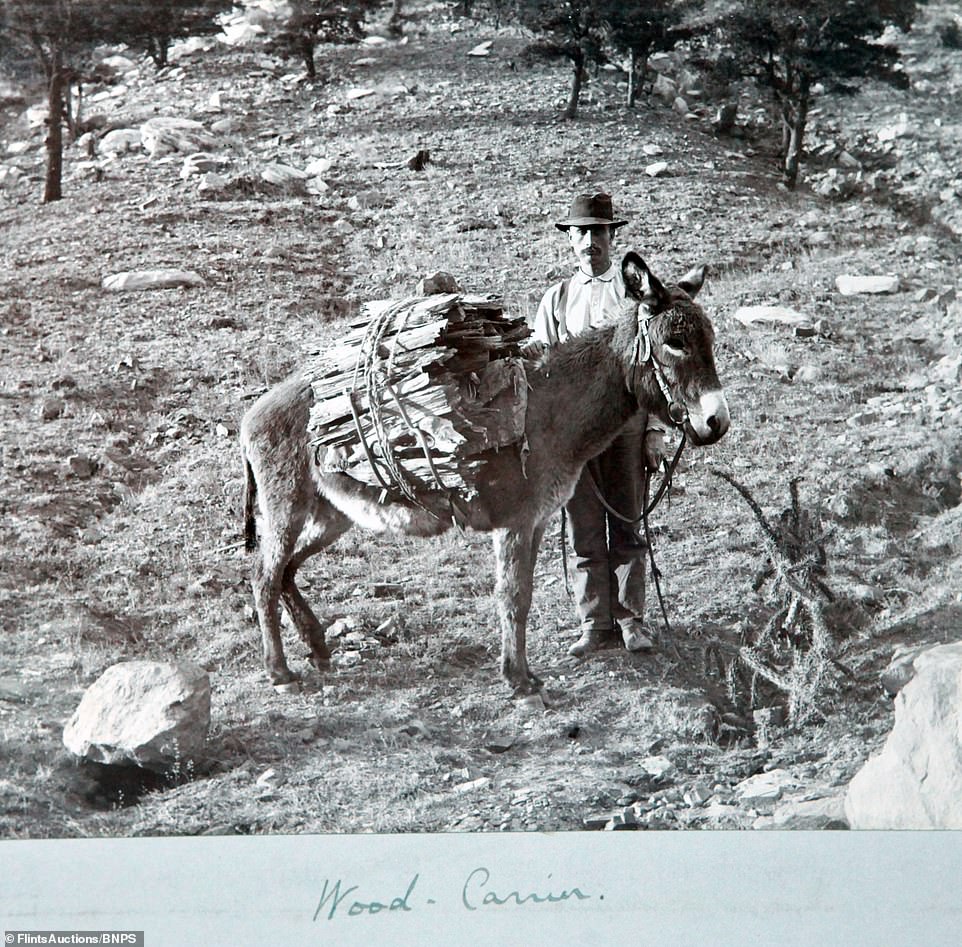 Wood carrier: This image shows a man leading a donkey up a hill carrying wood on its back. This set of fascinating pictures are thought to have been taken by a British farmhand who traveled across the US in the late 19th century to earn a living 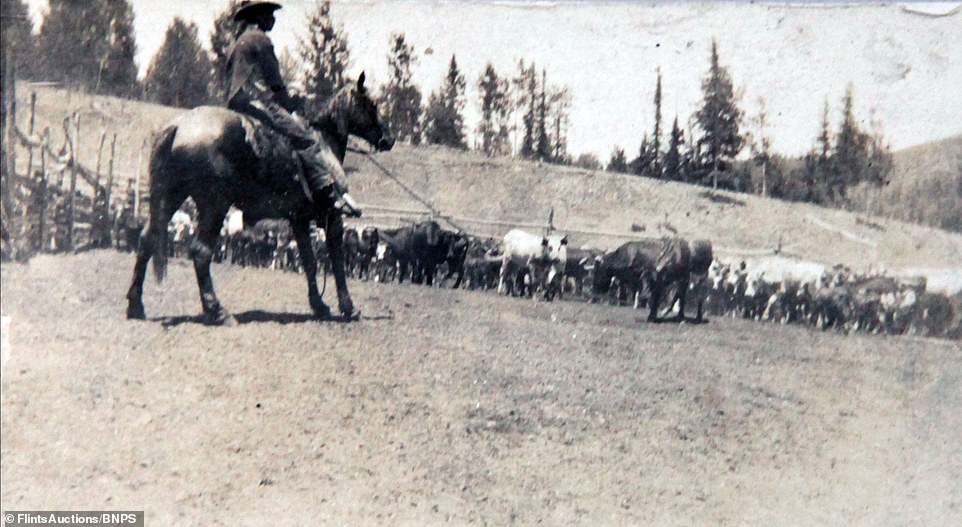 Out on the range: A cowboy can be seen rounding up some steers on a ranch. There unseen images are of cattle ranching and farming, as well as snaps of a cattle round up and bustling street scenes in Taos, Santa Fe on San Geronimo day 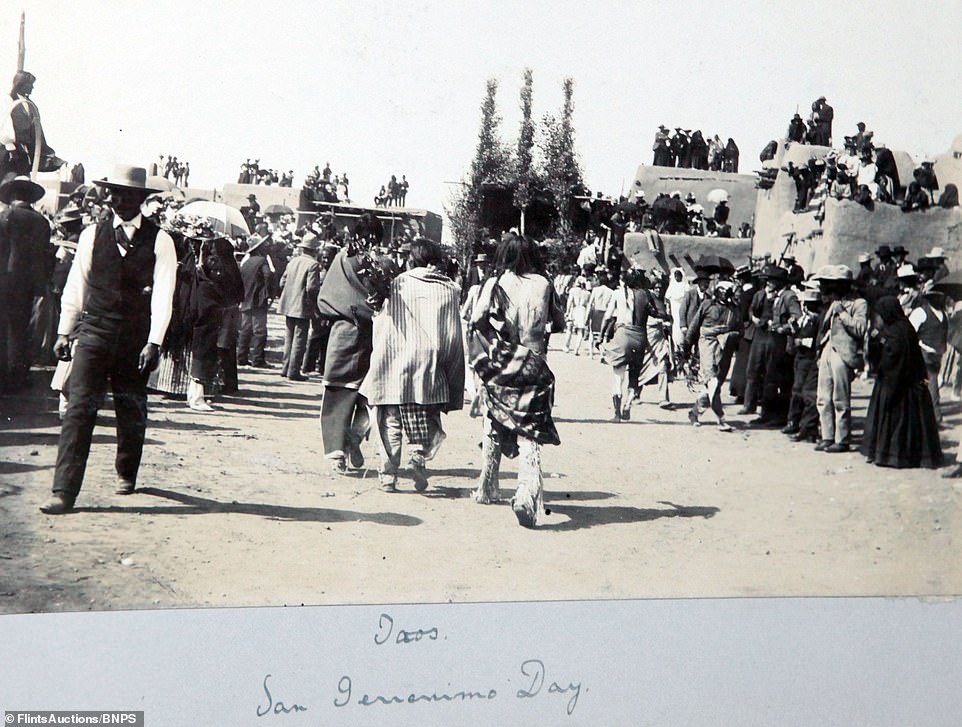 This images shows people celebrating ‘San Geronimo Day’, which is a religious celebration, in the Taos Pueblo near Santa Fe, New Mexico 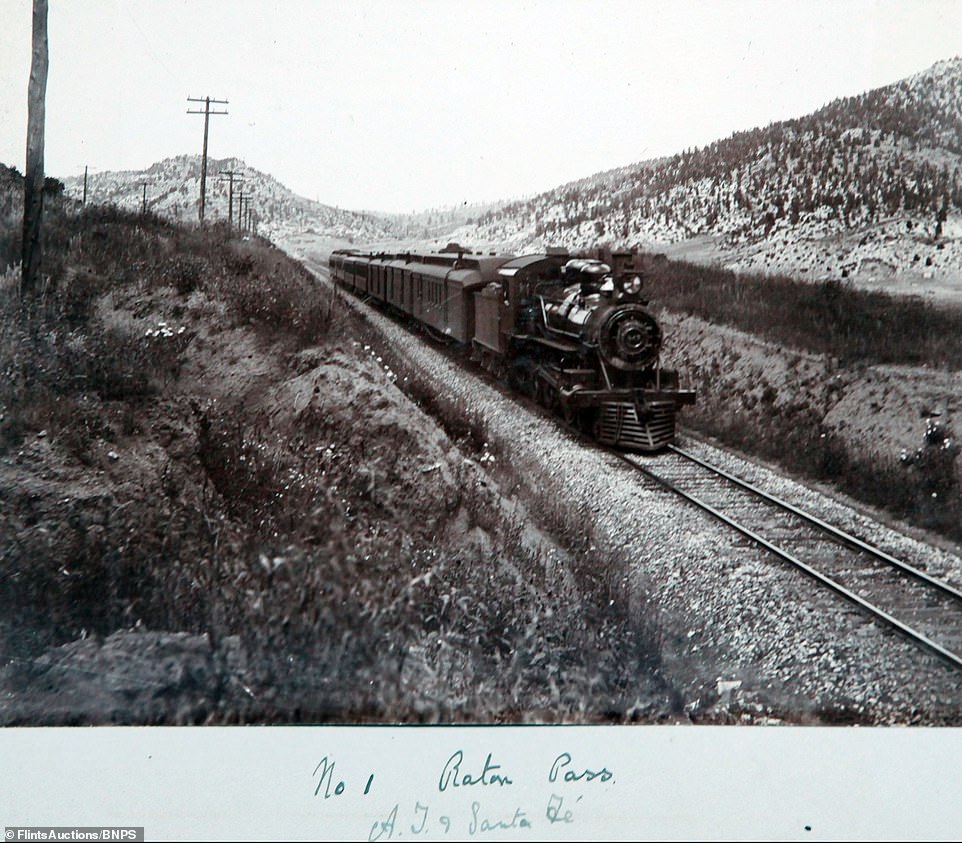 No One locomotive in the Raton Pass on the Santa Fe, New Mexico, railroad. The collections also includes breathtaking pictures of the Spanish Peaks in Colorado which the Ute Indians named ‘Huajatolla’, which translates as the ‘breasts of the Earth’ 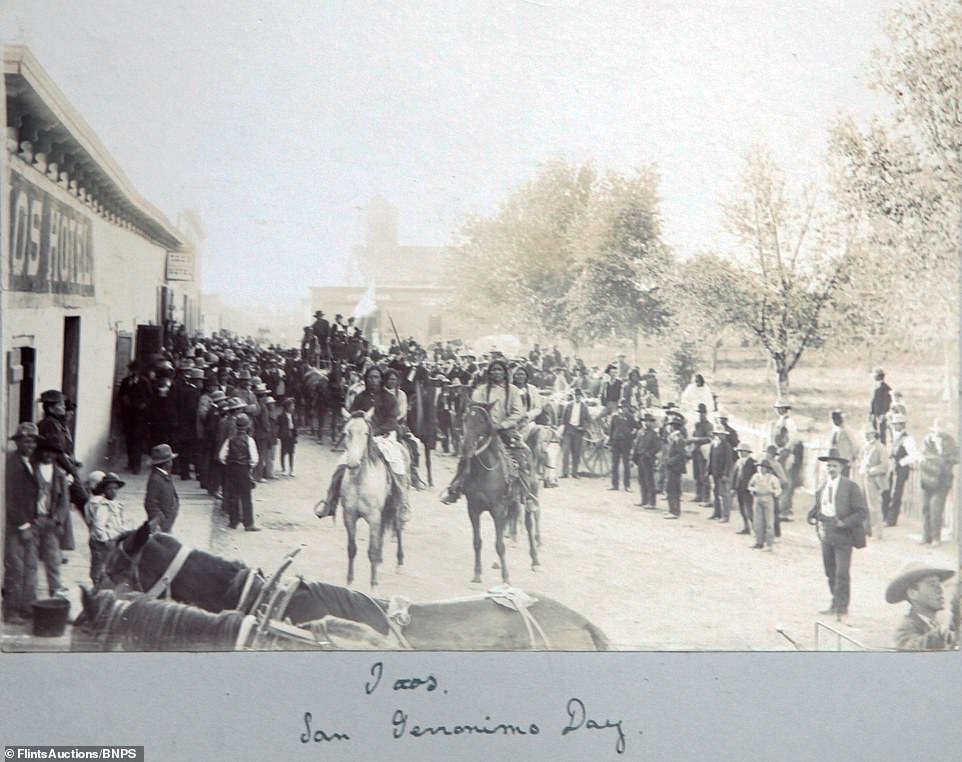 ‘San Geronimo Day’ in the Taos Pueblo near Santa Fe, New Mexico. The celebration is to commemorate the feast day for St Jerome, the patron saint of Taos Pueblo, probably the best known of the 19 Indian pueblos – or villages – in New Mexico 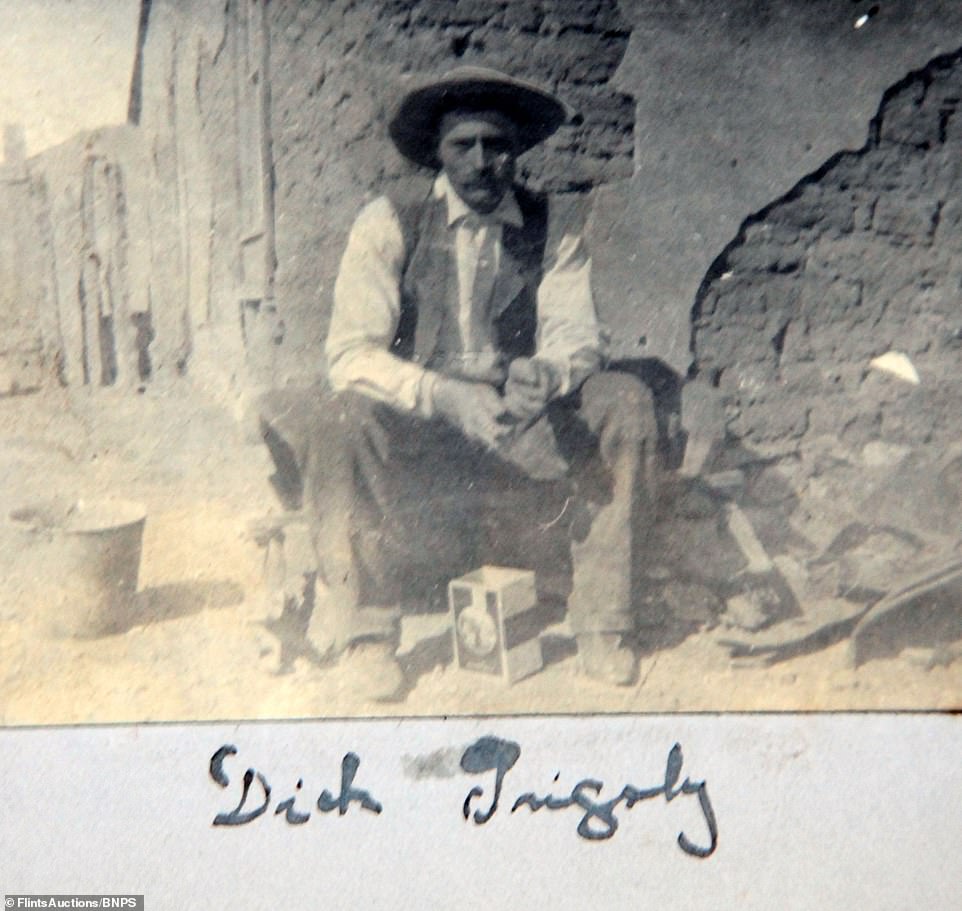 A man captioned as ‘Dick’ taking a break. Keith Petts, director at Flints Auctions that is selling the collection, said: ‘These are wonderful early images of cowboys’ 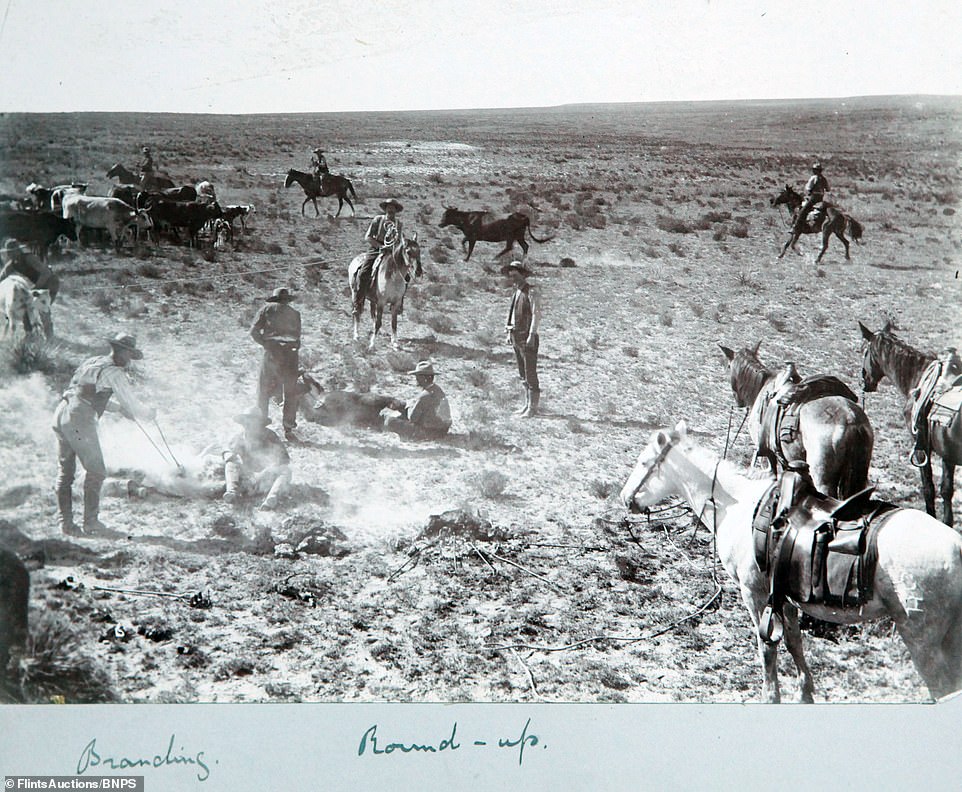 This photograph shows a group of cowboys branding the cattle on the open plains. Keith Petts added: ‘The album has been consigned from the family of a deceased estate of a collector of cameras and photos’ 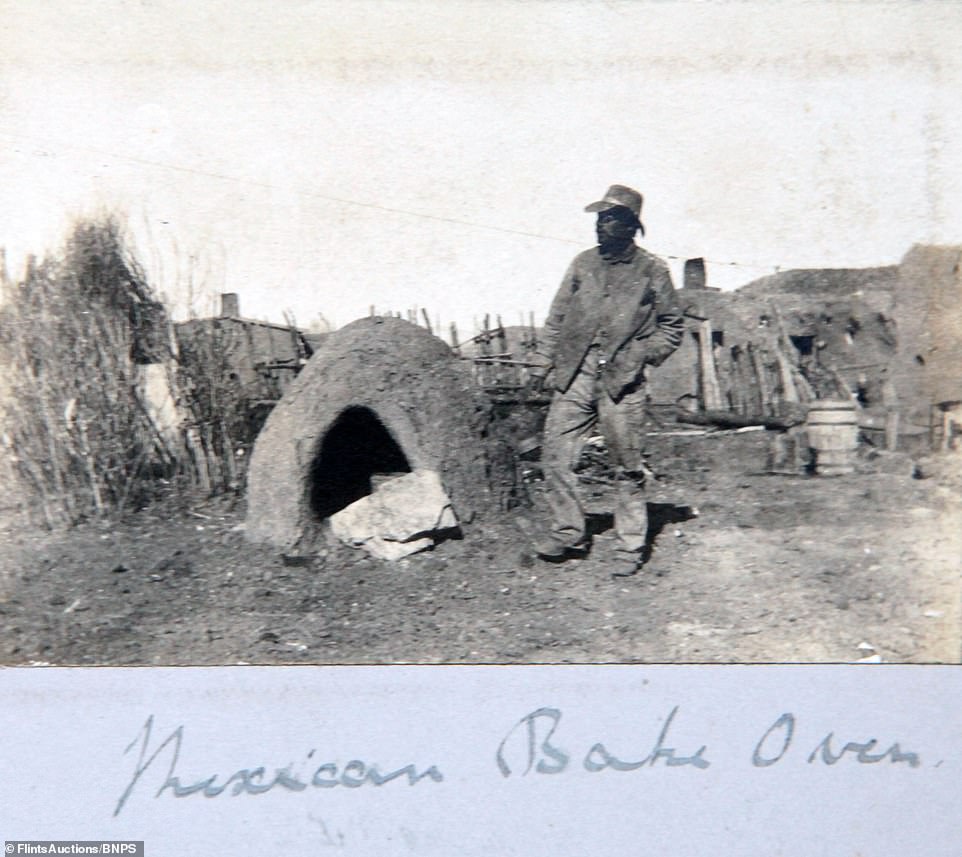 A number of Mexican bake ovens shown here with a man standing near them. Mr Petts said of the previously unseen collection: ‘It is quite rare to find this breadth of images documenting every day life on the ranches at the time’ 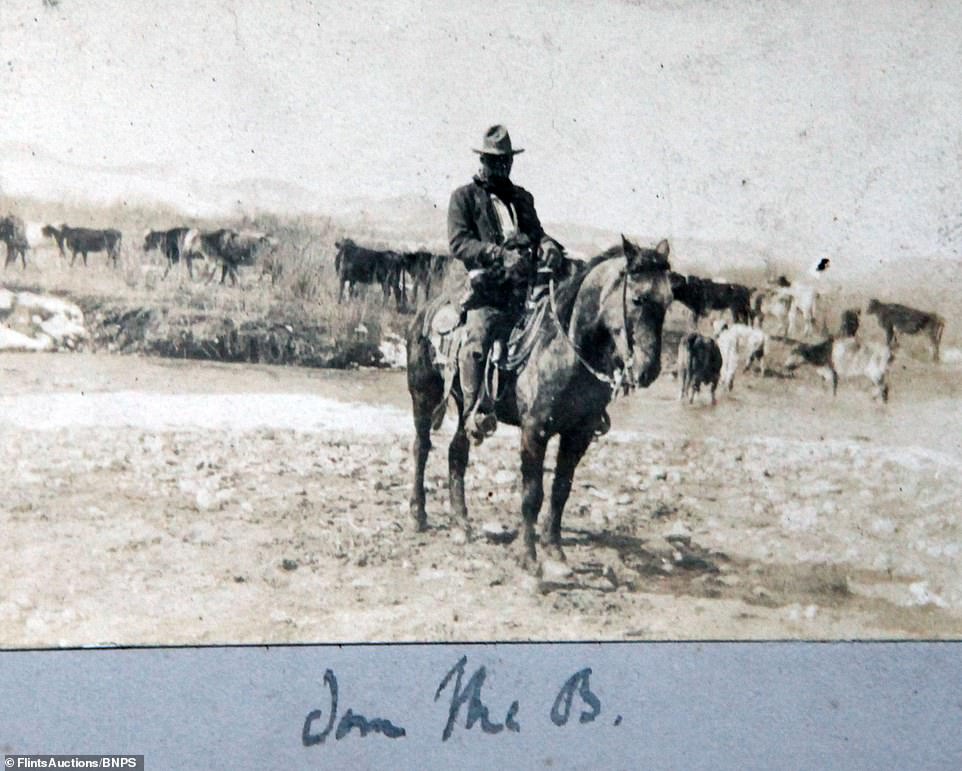 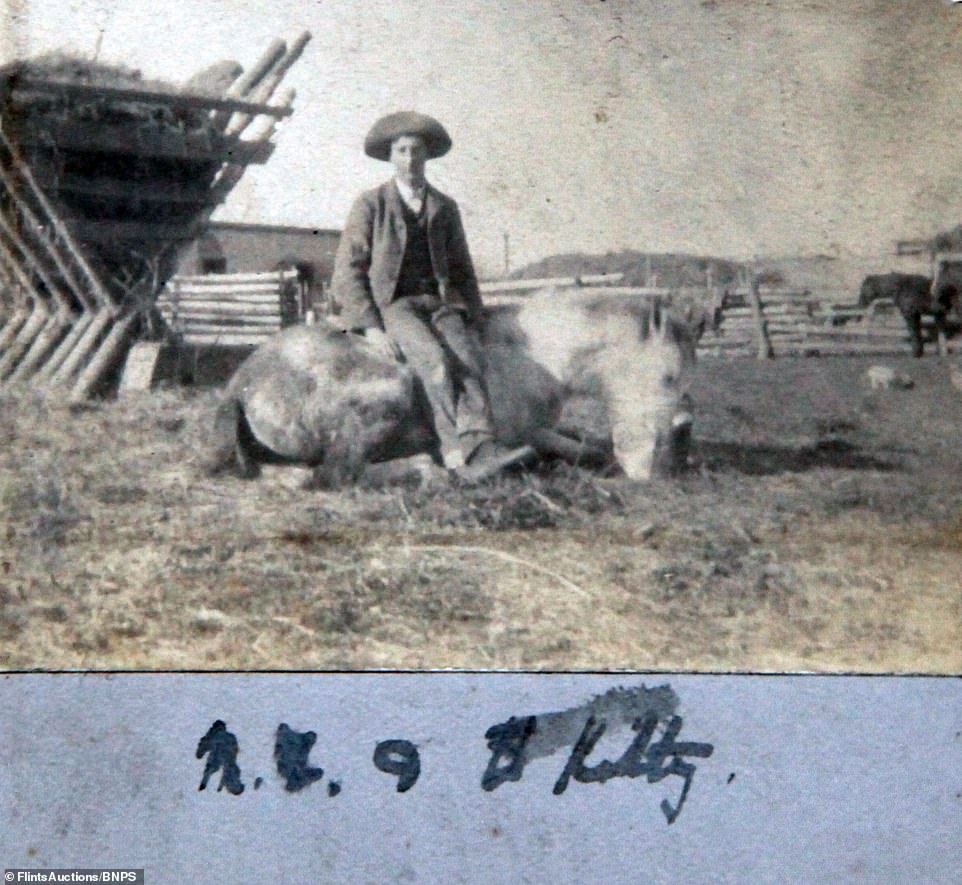 A cowboy is seen here sitting on his horse in a field. The historic American cowboy of the late 19th century arose from the vaquero, or cattle driver, traditions of northern Mexico 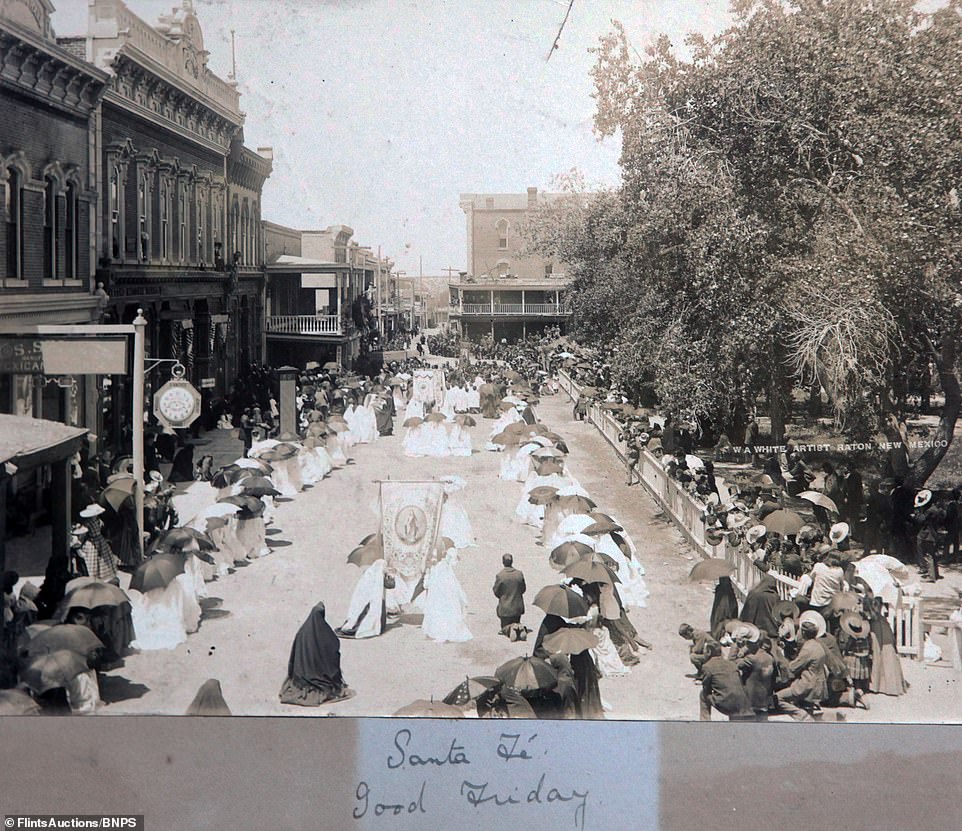 Good Friday ceremony in the main square of Santa Fe, New Mexico. One of the 13 larger prints by a professional photographer of the era called W.A. White. His name and home town of Raton New Mexico are written on the right hand side of the photograph 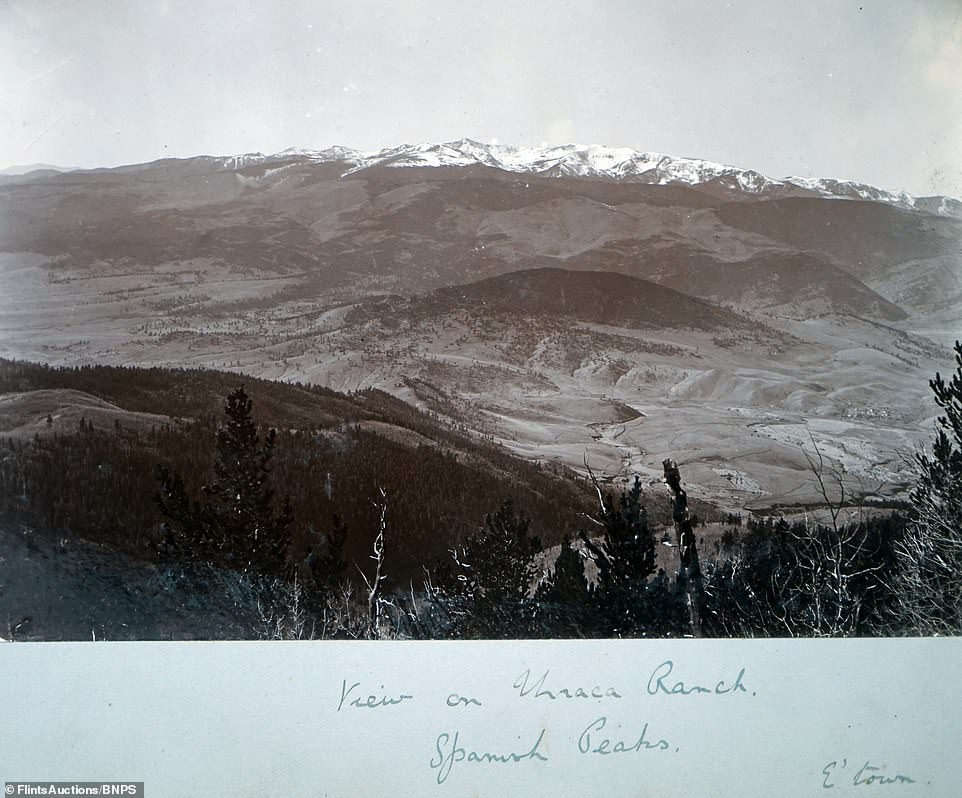 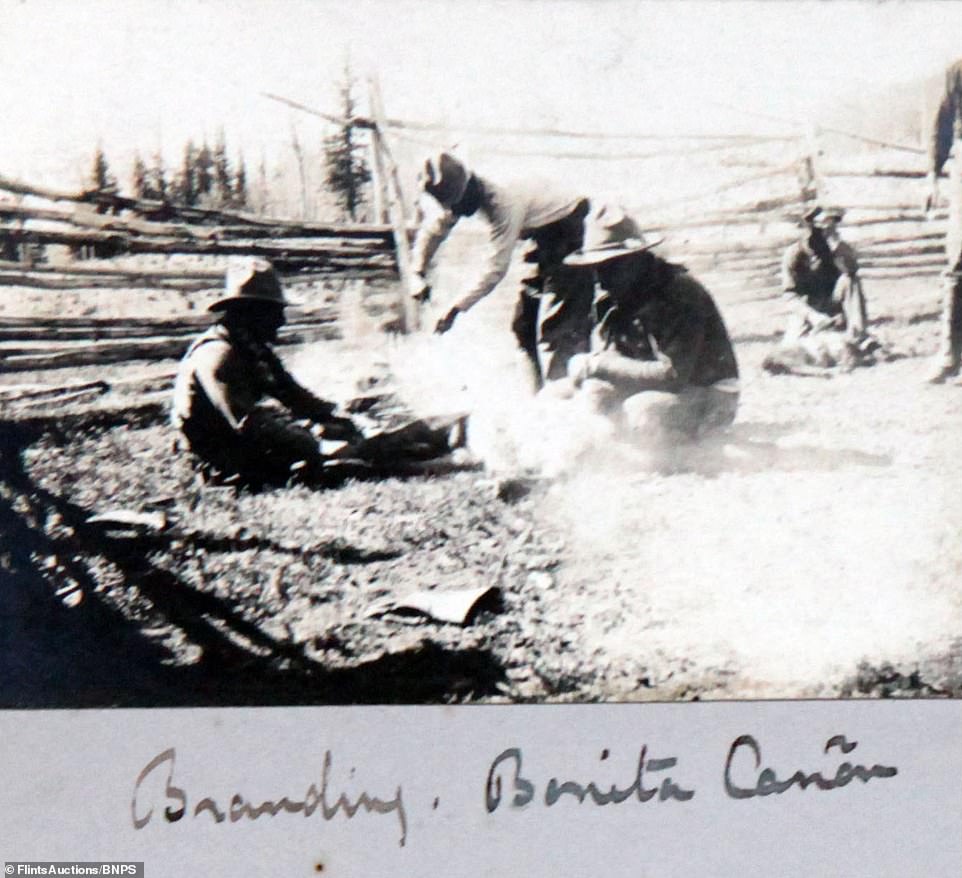 Here a group of three cowboys can be seen branding cattle in Bonita Canyo, New Mexico 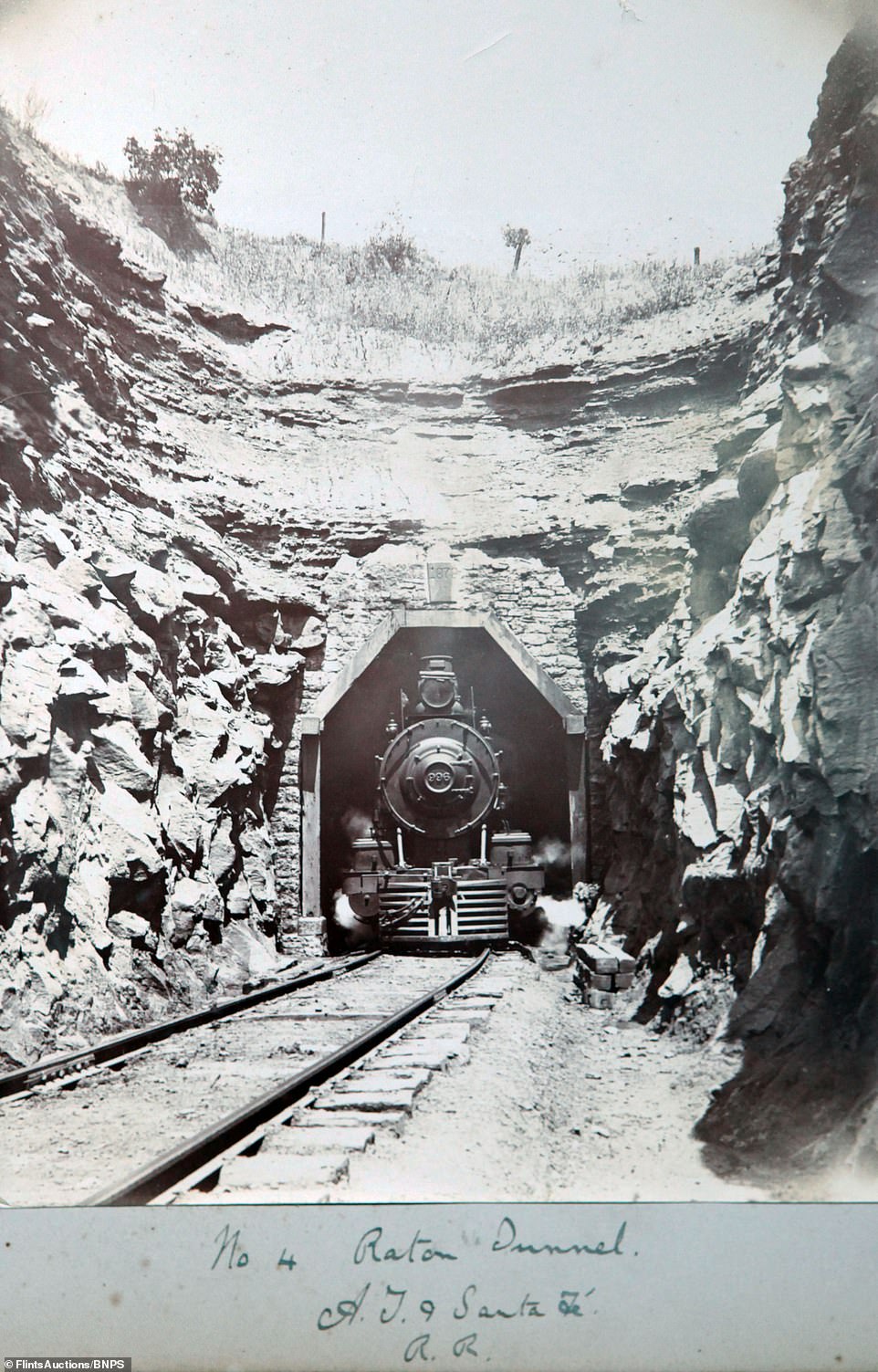 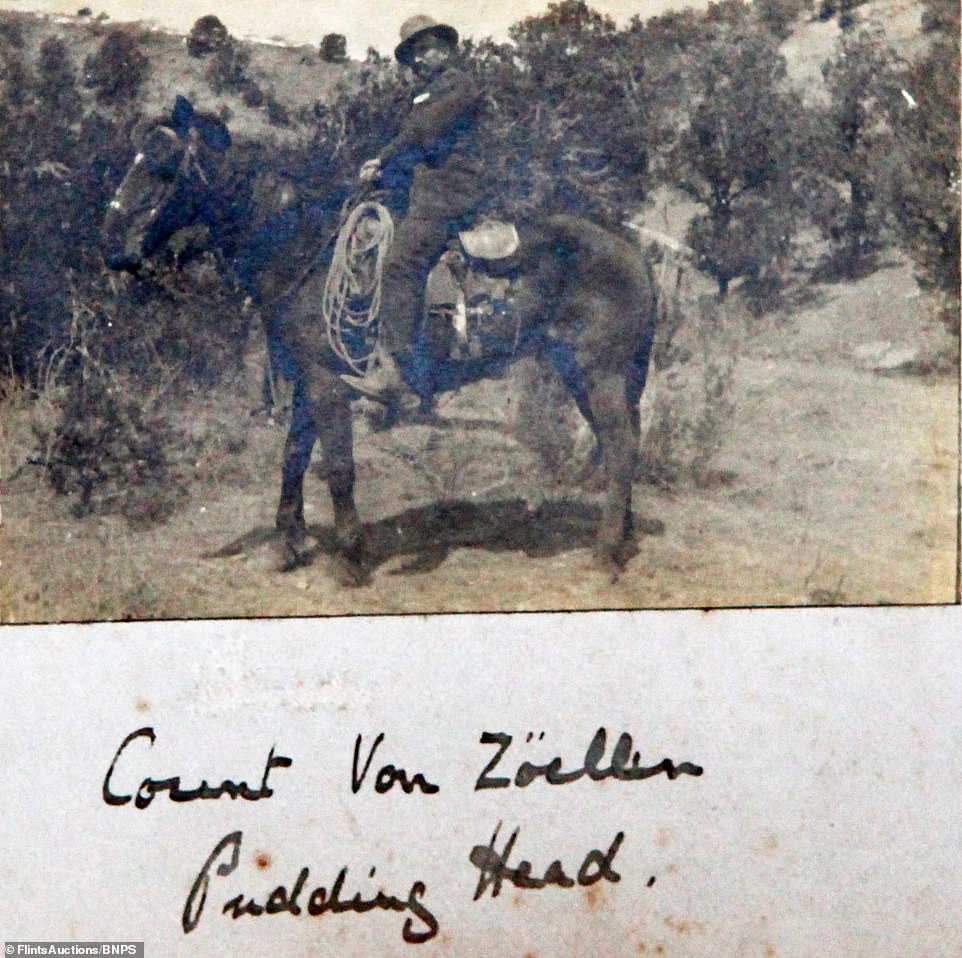 A cowboy is seen rounding up his cattle. Keith Petts said of the Brish farmhand who took these pictures: ‘It is possible that a British man went over from Surrey in the late 1880s to work on the ranches in America and kept this photographic record, bringing it back with him at some point’ 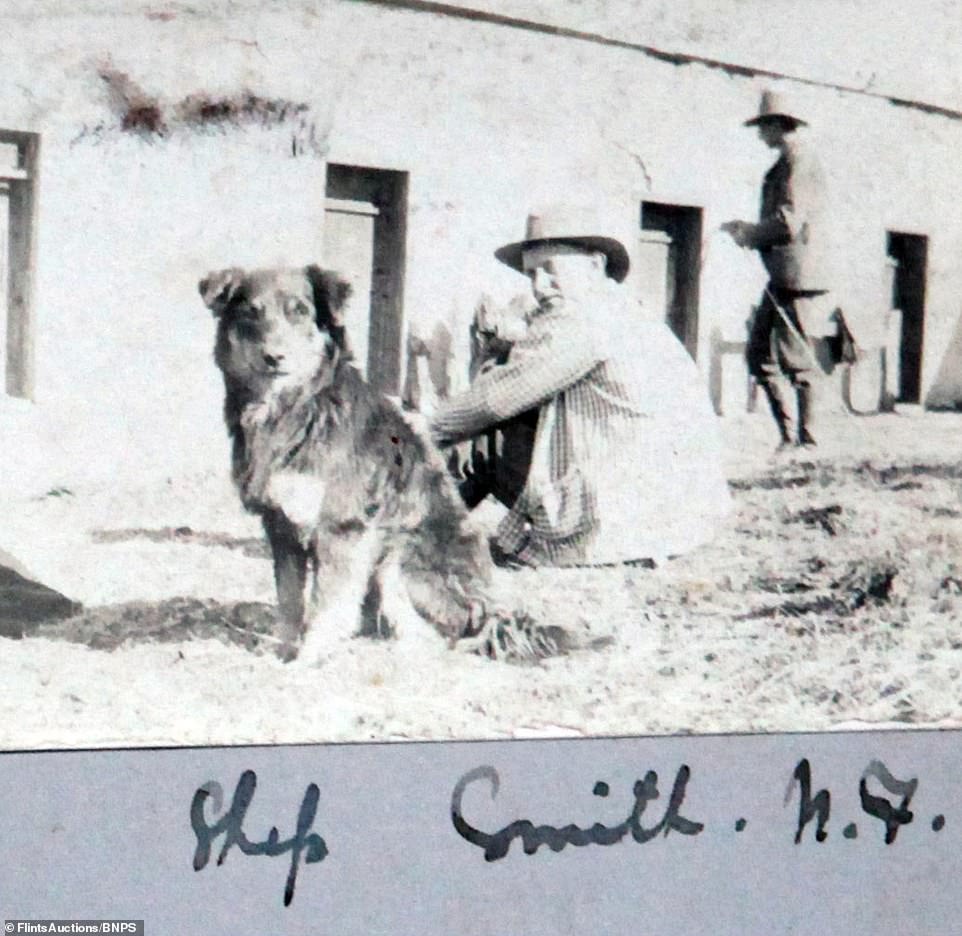 Even in the Wild West the dogs were called Shep. This collection of images shows life on the ranches of Colorado and New Mexico in the vast expanses of the south west US in the 1880s 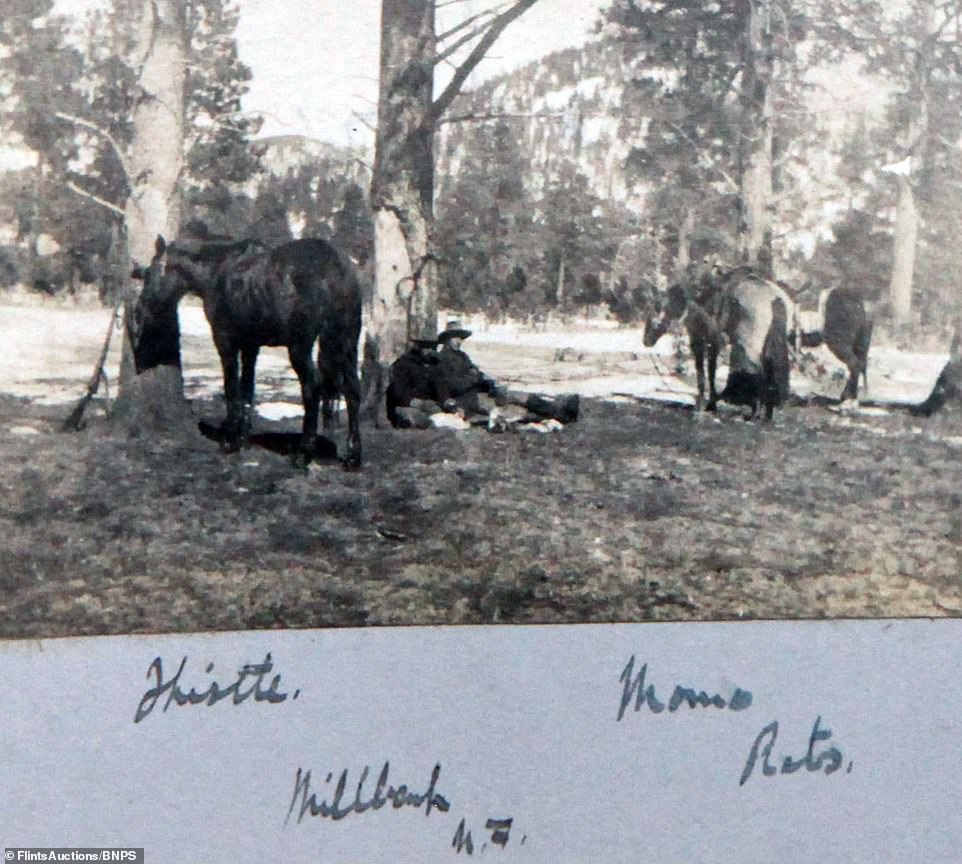 Two cowboys are pictured here resting with their horses. Keith Petts, director at Flints Auctions, said: ‘It was not until the 1890s that amateur photography really took off in the US’ 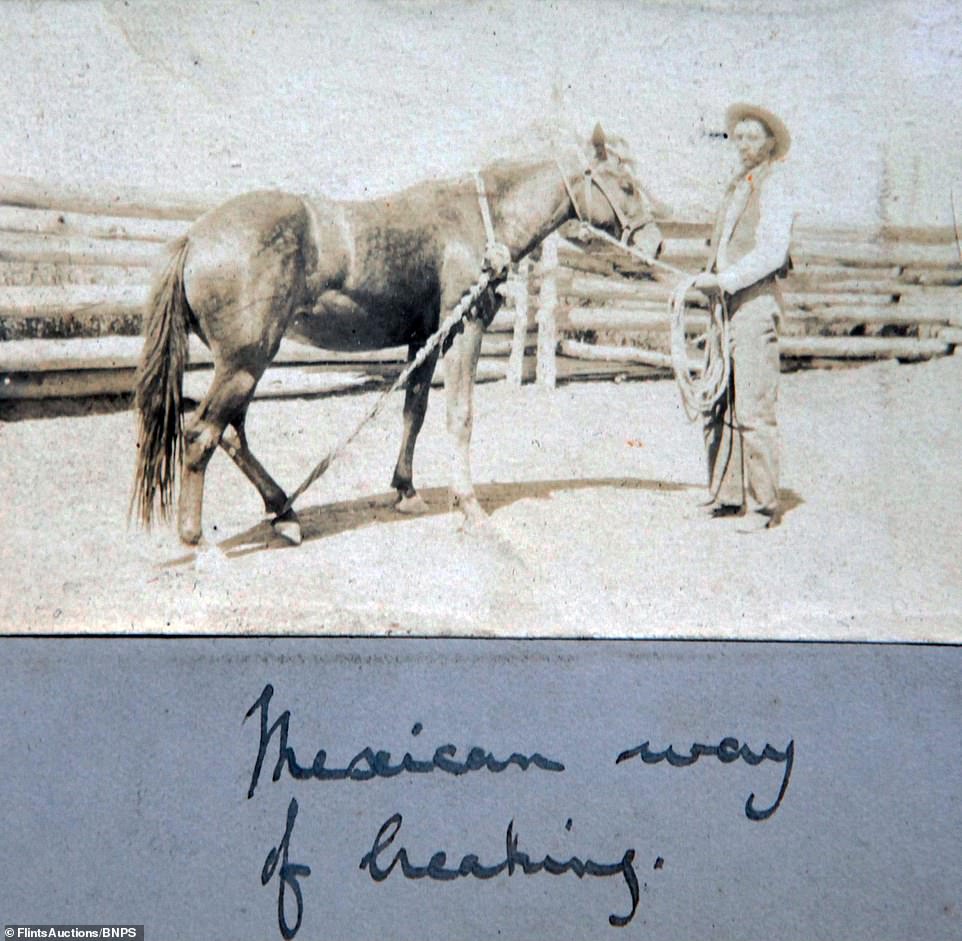 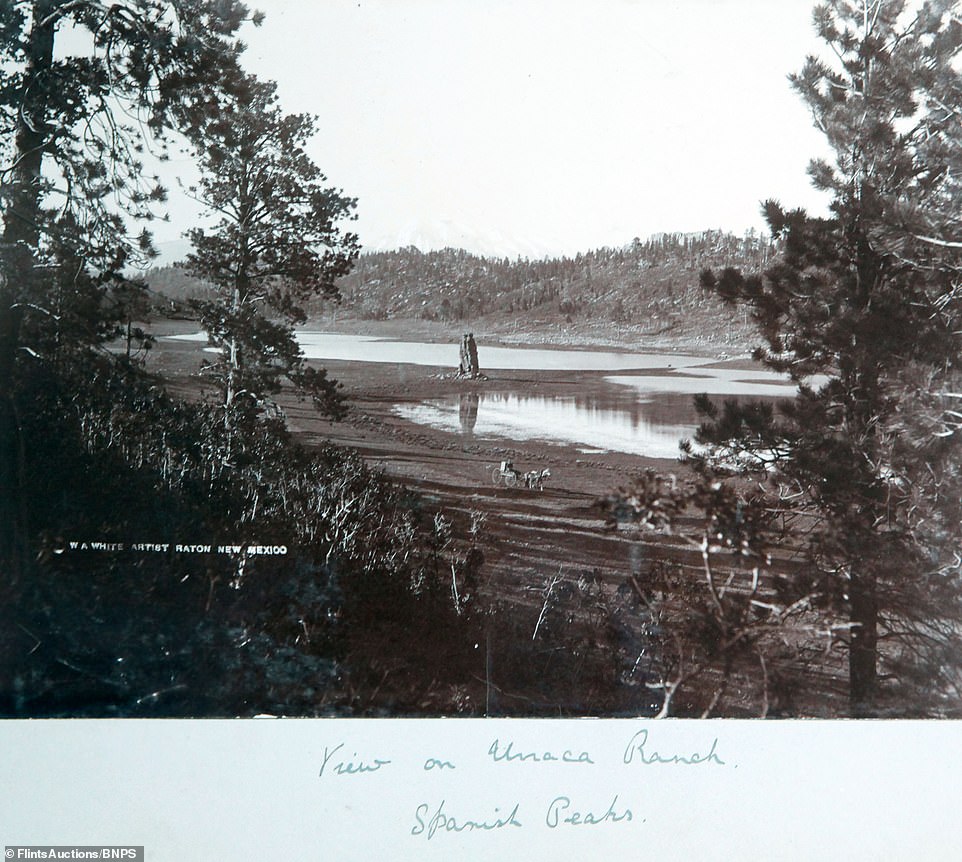 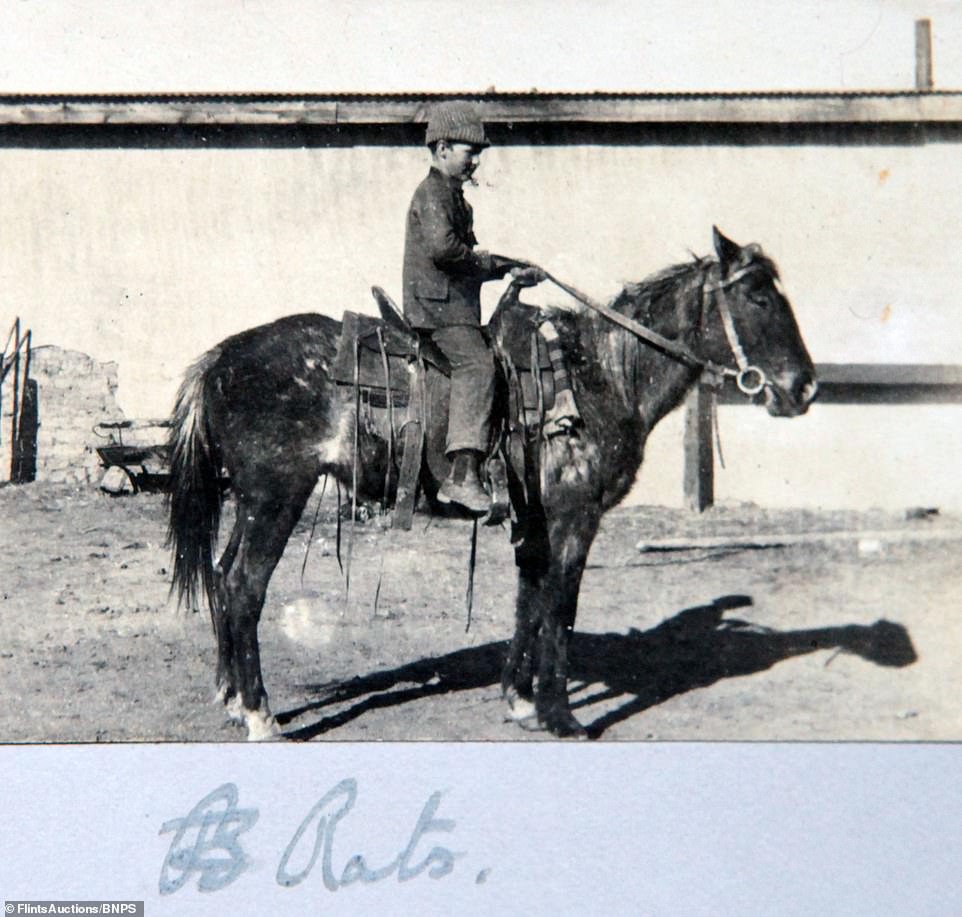 A young cowboy ‘Rat’ is pictured on his bedraggled horse. Cowboys have become immortalized in Wild West films, which tell the controversial story of ‘Cowboys v Indians’ conflict which saw many indigenous people driven from their lands 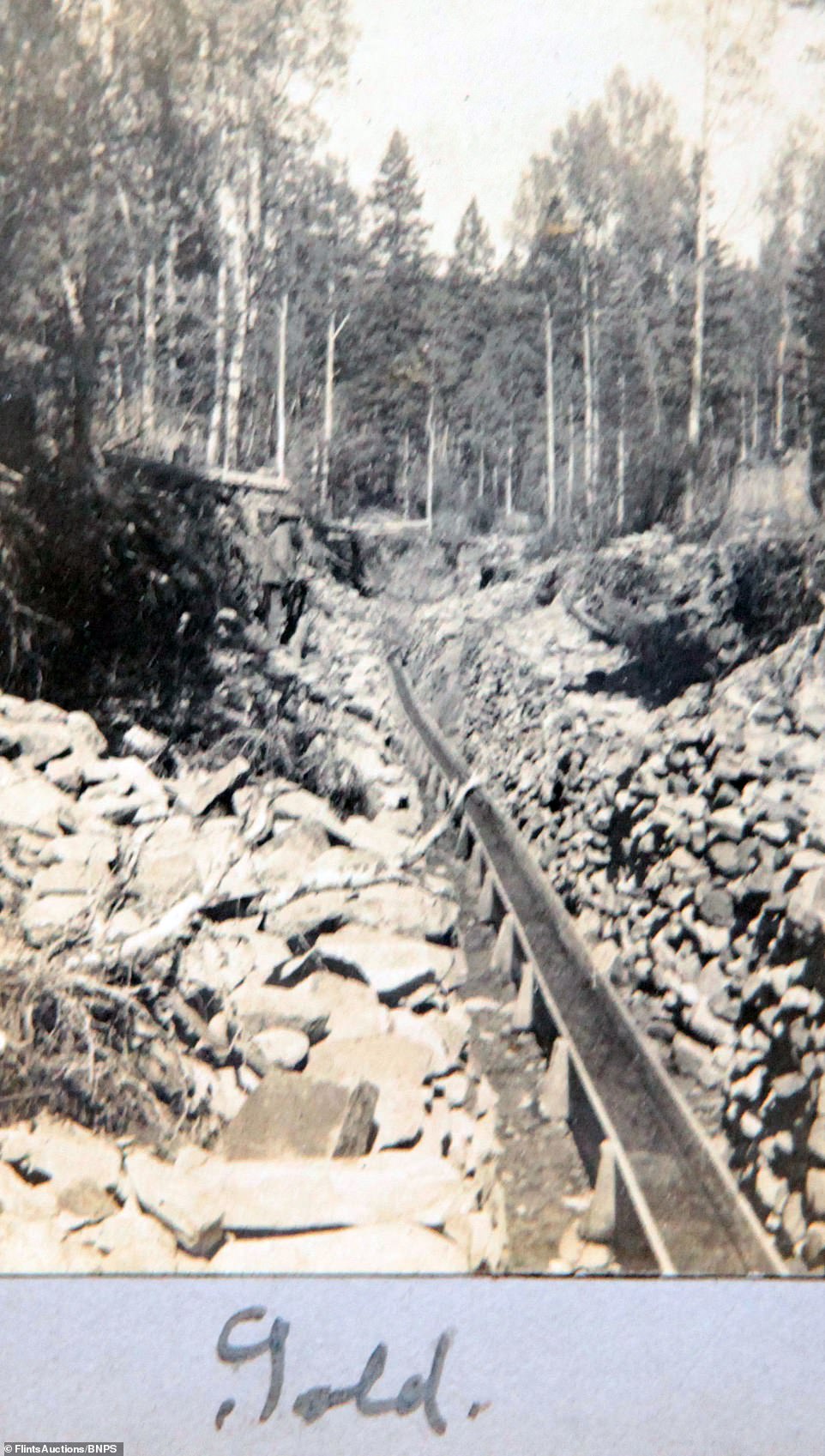 In this photograph a channel can be seen with the caption ‘Gold’. It is likely this was used to transport gold from prospecting mines to be processed