Donald Trump has refused to accept the results of this year’s US election, as the US President has repeatedly claimed Joe Biden’s victory was the product of voter fraud. Independent authorities and US officials have failed to find evidence backing up his claims, but he has persisted with requests for recounts in states where Mr Biden’s lead was less commanding. A notable challenge in Wisconsin has now returned, but with bad news for Mr Trump.

How many extra votes did Joe Biden win in Wisconsin?

President Trump requested a recount in Wisconsin following a not-so-close race between him and Joe Biden in the state. 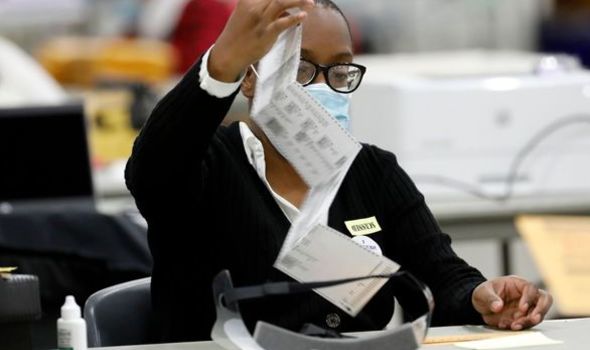 Results which came back this weekend extended Mr Biden’s lead in the state.

Electors first confirmed results in Milwaukee County on Saturday, as they found another 257 votes in his favour.

They also found a further 125 votes for Mr Trump, meaning Mr Biden’s overall lead in the county stands at 132.

Hand counting in Dane county finished this afternoon, which handed the incumbent President another 45.

But Mr Trump has refused to accept the results, vowing to lodge new legal proceedings.

He wrote on Twitter: “The Wisconsin recount is not about finding mistakes in the count, it is about finding people who have voted illegally, and that case will be brought after the recount is over, on Monday or Tuesday.

He added: “We have found many illegal votes. Stay tuned!”

But officials dispute his claims, hailing the results from the recount as “transparent”.

The recount, which ended on November 20, reconfirmed a lead of more than 12,000 in Mr Biden’s favour, prompting a stunning rebuke of Mr Trump by the state’s Republican Secretary of State.

Speaking in an interview with the Atlanta Journal-Constitution, Brad Raffensperger called on the President to “leave quietly” after he confirmed numbers confirmed in his state “are correct”.

He said: “My job as secretary of state is to make sure we have fair and honest elections, follow the law, follow the process.

“When you lose an election, you should leave quietly. It’s the will of the people that has been expressed.”

Mr Raffensperger added: “As secretary of state, I believe that the numbers that we have presented today are correct.”

Celebrities
GMB: Katy Rickitt makes awkward World Cup blunderKaty Rickitt, 36, started her Tuesday morning the wrong way, as the Good...
Lifestyle
The Coda Collection, a new multi-media company, is launching a channel on Amazon Prime featuring rare concerts and music documentaries,...
TV & Movies
Series join the previously announced “Pacific Rim: The Black,” which is currently in production Netflix and Legendary Television are teaming...
World News
China has started using anal swabs to test people who are believed to be at a high risk of catching...
Beauty
If there’s anyone we trust to dish out skincare and beauty recommendations, it’s Kourtney Kardashian. Back in 2017, the eldest...
Fashion
Amanda Gorman was undoubtedly the breakout star of the 2021 inauguration. As a Harvard grad and the first Youth poet...
Recent Posts
We and our partners use cookies on this site to improve our service, perform analytics, personalize advertising, measure advertising performance, and remember website preferences.Ok