Washington: The United States will team up with Australia and Canada to help countries around the world develop their reserves of minerals like lithium, copper and cobalt, the State Department said on Tuesday. 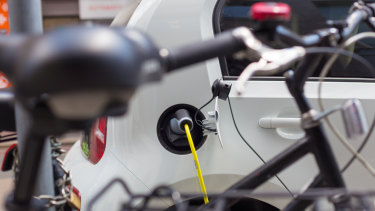 Demand for lithium is being driven largely by the move towards electric cars and bikes.Credit:Shutterstock

The moves is part of a multi-pronged strategy to reduce global reliance on China for materials crucial to high-tech industries.

Washington has grown increasingly concerned about its dependence on mineral imports after Beijing suggested using them as leverage in the ongoing trade war between the two countries.

Disruption to minerals trade would interrupt the manufacture of a wide range of consumer, industrial and military goods, including mobile phones, electric vehicles, batteries, and fighter jets.

"Over 80 per cent of the global supply chain of rare earth elements … is controlled by one country,” the State Department said in a fact sheet outlining the effort, which it has dubbed the Energy Resource Governance Initiative. “Reliance on any one source increases the risk of supply disruptions.”

Under the plan, the United States will share mining expertise with other countries to help them discover and develop their resources, and advise on management and governance frameworks to help ensure their industries are attractive to international investors. 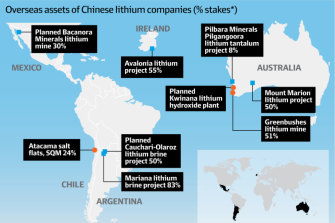 Chinese companies have bought up mines from Australia to South America and are building plants in China to make lithium chemicals and batteries. Credit:

The US wants to safeguard global supply for the minerals and ensure world demand – which is projected to surge alongside the growing take-up in high-technology goods – is protected.

"Demand for critical energy minerals could increase almost 1000% by 2050," according to the State Department.

Frank Fannon, the US assistant secretary of state for energy resources, said in an interview that tensions with China show the United States should be producing more rare earth minerals and help others ensure a secure supply.

"We need to do more and we are not alone in this," Fannon said.

Canada and Australia, two major mining countries, were partnering in the effort and other allies could join later, a US official said.

Canada's Ambassador to the United States, David MacNaughton, said Canadian officials had met with the State Department several times to discuss critical minerals and environmental issues around global mining and he looked forward to advancing the initiative.

Representatives of Australia did not immediately respond to a request for comment.

The plan comes a week after the US Commerce Department recommended urgent steps to boost US domestic production of key minerals, including by providing low-interest loans to mining companies and requiring defence companies to buy American.

The Commerce report also recommended that US agencies review geographical areas that are currently protected and assess whether those restrictions should be lifted or reduced to allow for critical minerals development.