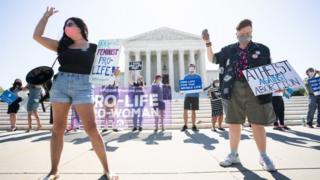 The US Supreme Court has ruled that a law restricting abortions in Louisiana is unconstitutional in a landmark decision.

The law required that doctors providing abortions have admitting privileges to nearby hospitals, which the justices said led to an undue burden on women.

Chief Justice John Roberts joined liberal justices in the 5-4 decision in a blow to anti-abortion groups.

The court struck down a similar policy in Texas in 2016, the opinion noted.

This is the first major abortion case ruling from the Supreme Court during the Trump presidency.

The 2014 Louisiana law said that doctors must hold privileges at hospitals within 30 miles (48km) of their practice – which the state argued was to protect women’s health.

But critics said the controversial law would limit the number of providers in the state, violating a woman’s right to an abortion.

What was the case about?

Medical Services vs Russo asked the Supreme Court to rule on whether to uphold a lower court’s opinion concerning the Louisiana law.

The law required doctors to have admitting privileges to a hospital “not further than 30 miles from the location at which the abortion is performed or induced” in order to perform abortions.

While the state said the requirement was to protect women’s health, pro-choice advocates said that it’s incredibly rare for women to face complications from an abortion. They also pointed out that many hospitals in the region are religiously-affiliated or conservative and don’t allow abortions to take place in their facilities, which severely limits the number of doctors who can carry out the procedure.

This then, in turn, constitutes an undue burden on a woman’s constitutional right to seek an abortion, they said.

However, the 5th Circuit appeals court determined no clinics would “likely be forced to close” because of the law, and allowed it to stand.

The petitioners asked the Supreme Court to rule on whether that decision violated past precedents and should be struck down.