Victorians are leading the country in terms of dissatisfaction with government economic policies, financial stress and feelings of depression and anxiety, crystallising the impact of the state's second wave of the coronavirus.

A Melbourne University study has found almost one third of Victorians surveyed were suffering mental distress most or all the time in the past week. 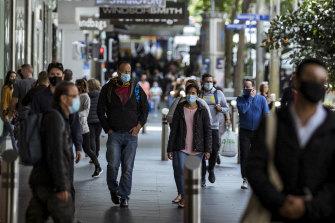 Pedestrians walk along Bourke Street on Melbourne’s first post-lockdown weekend. Victoria led the country on financial and mental distress at the end of its 15-week lockdown.Credit:Chris Hopkins

However, Guay Lim, the lead researcher behind the nationwide survey, said her team had been expecting the results to be even more jarring after Victoria's 15 weeks of lockdown.

"We have been surprised at how resilient people have been in Victoria," said Professor Lim, from the Melbourne Institute Of Applied Economic And Social Research.

"We were expecting financial and mental distress to be higher and we look forward to seeing the survey results post-lockdown."

The survey of 1200 people in the week of October 19 – one week before Victoria's most significant easing of restrictions so far – found Victorians' financial and mental health were at their worst level since early April, when stage three restrictions were introduced. 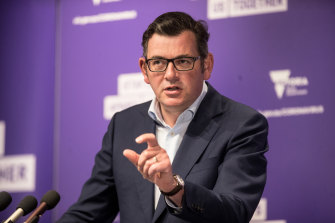 Ahead of the state budget on November 24, almost one in three Victorians want to see more economic support.Credit:Simon Schluter

Dissatisfaction with government economic policies across Australia has steadily grown in the last five months among those surveyed, rising slightly in October after JobKeeper and JobSeeker payments were reduced by the federal government.

Three weeks before the Andrews government hands down its budget on November 24, about 28 per cent of Victorians surveyed said the state and federal governments needed to offer more economic support. About 22 per cent of those surveyed in Queensland and 20 per cent in NSW reported similar dissatisfaction.

Almost half of Victorians said they had experienced some form of anxiety or depression in the previous week, compared to the nationwide average of about 42 per cent. 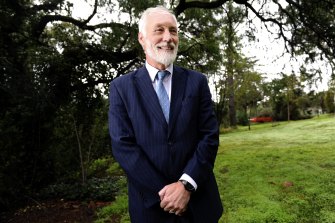 Youth mental health expert Professor Patrick McGorry says some will bounce out of lockdown while others may struggle.Credit:Pat Scala

Youth mental health expert Patrick McGorry, who has advised Premier Daniel Andrews throughout the pandemic, said while the majority of people feeling anxious or depressed would shake it off once lockdown lifted, some would suffer persistent hardship.

"If your business has gone south due to the lockdown or your school or university education has suffered, you might have chronic stress hanging over from that," he said.

"For some the wound might take a while to heal, for some people it won't heal and they will need professional help."

Professor McGorry said Victorians seeking psychological help had grown 30 per cent this year, and he was confident the state government would focus on youth mental health in its budget.

"Young people's lives have been compromised more than anyone else in the pandemic," he said. "If you want to turn things around and get bang for your buck, this is the group to focus on."

Joep van Agteren, a mental health researcher with the South Australian Health and Medical Research Institute, said his survey of South Australians' mental distress since the start of the year found they dipped then returned to a baseline once the first lockdown ended. But they fell again in September and October even without a second lockdown.

"We're not fully sure why. It may be end of year fatigue, the stress of deadlines before Christmas," he said. "That could be particularly acute in Victoria." 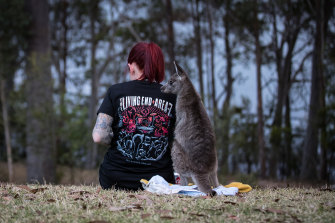 Research suggests the mental health impact of disasters such as bushfires crystallises in the two years after.Credit:Peter Sharp

"Research suggests even though suicides and problems with severe mental health haven't been up yet, they could come in the next months, particularly once income support fades in Australia."

Economically, over seven months of the pandemic, about one in four Australians say they have felt financially stressed.

The proportion of Victorians reporting difficulties paying for essential goods and services grew in October to lead the country, with 31 per cent of people surveyed compared to 25 per cent in NSW.

The federal government estimates Victoria's real unemployment rate could be as high as 14 per cent with 73,000 jobs lost in August and September – though this will likely be tempered in November as retail and hospitality reopen.