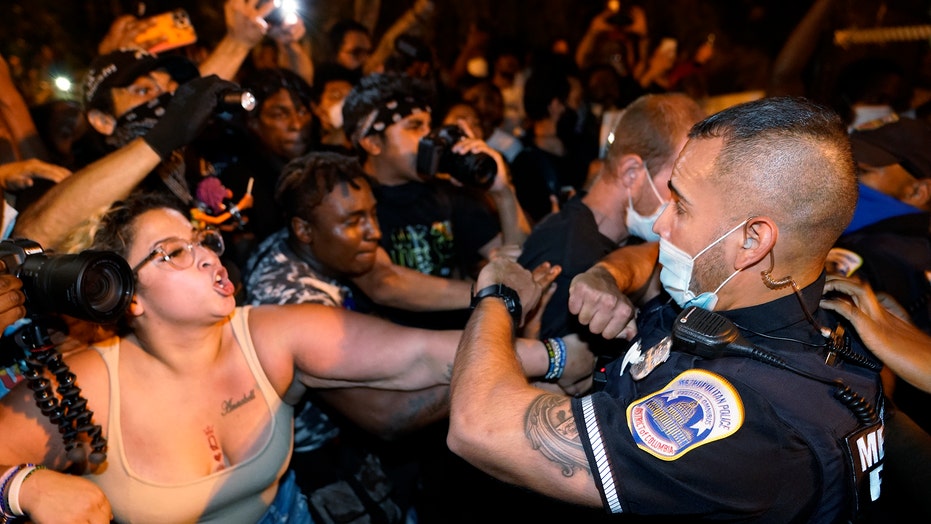 Violent clashes erupted in D.C. between protesters and police after the conclusion of the Republican National Convention (RNC) on Thursday night.

The protests started as a “noise demonstration and dance party" and seemed to intensify as the night continued. Videos emerged on social media that appeared to show city police clashing with protesters throughout city streets.

Protesters yelled and threw water bottles at police at the historic St. John's Church, which is near Black Lives Matter Plaza. There were some arrests.

SEN. RAND PAUL THANKS DC COPS FOR SAVING HIM FROM 'CRAZED MOB' AFTER RNC 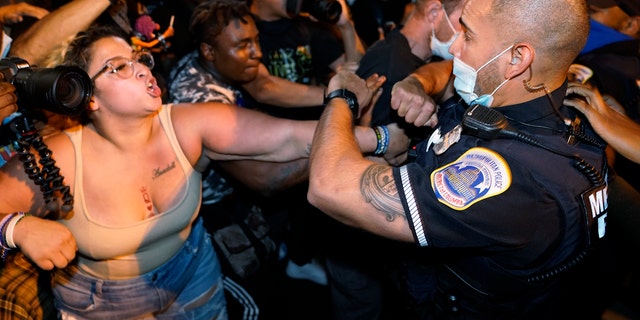 Tensions escalated at one intersection in the nation's capital when police arrived on bicycles to confront demonstrators.

At least one protester was seen grabbing an officer's bike while another held up a Black Lives Matter sign in the face of a member of law enforcement — as the crowd advanced, according to a video. A brawl ensued between protesters and police, with both sides captured on video appearing to throw punches.

Video also emerged of a man dressed in blackface who appeared to be punched by a protester.

The violent protester ran off, and a chase ensued before an officer tried to place him in a headlock. A crowd would descend on the officer and at least one person yelled at police to "get off him."

A separate video saw a handful of officers attempting to arrest a protester. It's not clear if police were arresting the same man who led officers on the previous chase.

Video on social media also appeared to show a crowd chasing and jeering Sen. Rand Paul, R-Ky, who was escorted by D.C. police as he returned to his hotel. An officer was captured on video being shoved by a protester and was nearly knocked over. Paul appeared to help steady the officer.

He would later thank D.C. police for saving him from a "crazed mob."

Celebrities
What's the truth about Kaley Cuoco's marriage? In one of her best-known roles, Kaley Cuoco — who's undergone a stunning transformation...
Lifestyle
Virginia's Democratic Governor Ralph Northam said Friday that he and the state's first lady have tested positive for COVID-19. Northam...
TV & Movies
Here’s what you need to know about what’s happening this week with “Saturday Night Live” NBC Season 45 of “SNL”...
World News
SCOTS snubbed pubs last night as a nationwide 10pm curfew kicked in. Edinburgh and Glasgow were left like ghost towns...
Beauty
Makeup guru Jeffree Star has been known to make some wild style choices. His heavily inked body of tattooed art...
Fashion
We will use your email address only for sending you newsletters. Please see our Privacy Notice for details of your...
Recent Posts
We and our partners use cookies on this site to improve our service, perform analytics, personalize advertising, measure advertising performance, and remember website preferences.Ok