Back in the days of black-and-white television, teenager Ken Ashworth’s future was decided on a flick of the switch – the one on the TV in his family’s Glen Iris lounge room.

Before remote controls encouraged channel surfing, a program was selected (usually by the dad) and that was it. For the Ashworths that usually meant a local cop show: Homicide, Division 4 or Matlock Police. For Ken, the youngest of three boys, it set up a nagging thought: maybe one day he could be a real-life version of the TV detective. 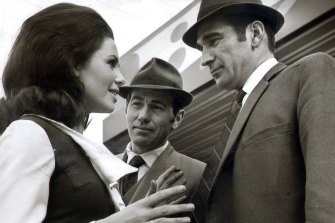 A different era: TV detectives at work in a 1970 episode of Division 4.

Straight out of school he applied, joining as a cadet before walking into the Police Academy in February 1977 at the worldly age of 18 years, six months. These days he would be told to go away and get some life experience. In those days you could move from a school uniform to a police one in weeks.

Most of those in the Academy went on to varied careers (one used his training in a unique way, becoming an armed robber who abducted a bank manager) but Ken was always heading for a detective's job, spending years in the hard squads, homicide, armed robbery, gangland, drug and arson.

It came at a cost and now, retiring after more than 43 years at the sharp end, he is left to manage Post-Traumatic Stress Disorder. “I don’t think you can be operational for more than 10 or 15 years without suffering some damage.” 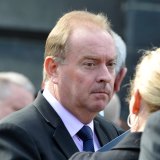 In the beginning he was sent to Collingwood to learn the caper, where the sergeants were usually trained detectives who passed on the methods of investigating serious crime.

Not only did he meet good coppers but “good’’ crooks such as members of the notorious Pettingill family, including prodigious drug dealer and killer Dennis Bruce “Mr Death” Allen and his half-brother Victor George Peirce, armed robber, gangster and alleged police murderer. When Ashworth caught Lex Peirce in the middle of a burglary at the Grace Darling Hotel, the clan laid siege to the Collingwood police station, leading to a lockdown until reinforcements arrived from Richmond.

A stint in Brighton – including a chest-to-chest confrontation with a key organiser of the Great Bookie Robbery – left him ready for the squads, particularly “The Robbers”, police who chased the highly-trained gangs that hit banks on a daily basis and armoured vans every second week.

These gangs used paramilitary training, had access to high-powered weapons and often used inside intelligence and sophisticated surveillance to identify lucrative targets.

At a time when cash was king, the top-end bandits would be disappointed if their haul from a major job was less than six figures.

“On one shift we had three banks go off. It was out of control,” recalls Ken.

In 1988 he was one of a team of armed robbery squad detectives called to Doncaster Shoppingtown when the crew of an armoured van radioed police to say they thought they were being followed.

A local divisional van did a sweep but, seeing nothing suspicious, they left. The armed robbery detectives looked at the scene differently and spotted a suspicious Holden station wagon. Looking inside they saw a library card, usually the sign of a bookworm, not a bandit.

Except this one was for Sydney’s Long Bay Prison library and the recipient was Ray Denning, a NSW escapee.

Soon three carloads of detectives armed with handguns and pistol grip shotguns were searching the area for bandits. When Denning returned he wisely surrendered.

They had caught a big fish, but there was a bigger one.

Denning’s partner, a man in a yellow Ford Fairlane, headed for what he thought was the exit, waving a gun at his pursuers. It turned out to be a dead end and as he doubled back police opened fire, causing him to crash. After he came to a halt he knew the game was up when Ashworth put a shot into the passenger door. 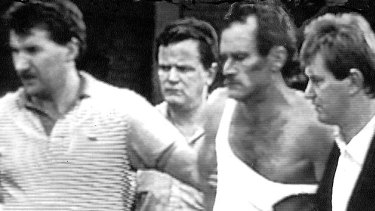 The unknown gunman asked arresting police if they knew who they had caught. When asked his name he refused to give it, adding: “You blokes will jump through hoops when you know.”

Fingerprints showed they had Australia’s most notorious escapee, Russell Cox, on the run for 11 years after breaking free from the supposedly escape-proof Katingal Prison.

In 1983 Cox had an argument and a subsequent shootout with his then armed robbery partner, Ian Revell Carroll, at a not-so-safehouse in Mount Martha. Cox was badly wounded but recovered. Carroll was dead. 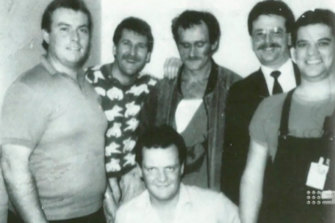 The ultimate trophy photo: armed robbery detectives, including Ken Ashworth on the left, with a captive Russell Cox.

What was found in the house illustrated the sophistication of the crews. There were strong boxes filled with stick-up plans, disguises and an arsenal of firearms. Police believe Cox was franchising armed robberies to other crooks.

Later police were told they had missed $1 million in cash hidden in a homebrew barrel buried under a shed. When they returned they found a hole and the barrel gone. “I believe it was proceeds from the Great Bookie Robbery,” says Ashworth.

Certainly in the months that followed the 1976 Bookie Robbery Carroll deposited $450,000 in unexplained funds.

Many of the Bookie robbers were never going to make old bones. In 1979 organiser Ray Bennett was shot dead inside the Melbourne Magistrates Court, Laurie Prendergast went missing in 1985 and then there is Normie “Chops” Lee, the only man charged (and acquitted) of the crime. 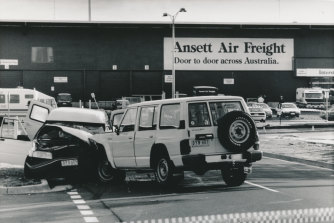 Barci was badly wounded and Asling arrested unharmed. Asling later became a hitman and was convicted of the 2003 murder of Graham Kinniburgh.

It wasn’t all blood and guns. Ashworth went on to run Search and Rescue and Water Police, upgrading and modernising both. (The original police flagship, the Reginald Jackson, was so slow it was more suited to High Teas than the High Seas.)

He won a Churchill Fellowship to study maritime policing, turning the Water Police from predominately a rescue service to include anti-terrorism capacities.

He also led the Trident Taskforce that worked on docklands crime, where corrupt agents worked with drug traffickers to release their products from the wharves.

“They needed to have people on the inside to get their containers out undetected,” Ashworth says.

Containers were “mistakenly” taken and then returned. “Who knows what was taken out in that time?” Ashworth asks, adding that replica security tags could be ordered in China that would make it appear the container had not been opened.

One syndicate they smashed was a US, Spanish, Albanian and Australian ring that imported classic American cars filled with up to 100 kilos of ice and cocaine.

In 2014 they seized a 1967 Chevrolet Impala containing $20 million in illicit powders. “Three cars came out. Two were never seen again.”

The trouble with working at the sharp end is you don’t see how it blunts you, slowly leaving permanent damage. For Ashworth it was not one incident but hundreds that left him needing help. 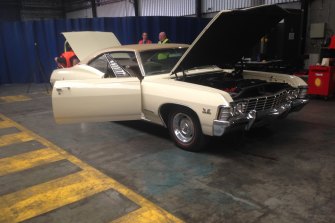 There were seven cases where police shot and killed suspects, the bandit who killed an innocent citizen in a car collision during a pursuit and the colleagues killed on duty, including Gary Silk and Rod Miller, gunned down in August 1998 in Cochranes Road, Moorabbin. There were the victims, the dawn raids looking for armed offenders, the 20-hour days and life-and-death decisions made on the run.

It starts with hyper-vigilance, where you can’t relax. “You walk into a shop [and immediately] you look for vulnerabilities and exit and entry points. You see a driver – why is he wearing gloves in the middle of the day? You are always looking for crooks, you are never off duty.

“See a cop and he will be the one sitting with his back to the wall.”

“There is the alcohol abuse. You debrief after an incident with a slab. But the demons come back at two, three and four in the morning. There are the flashbacks. You become tired, grumpy and neglect everything else.”

After panic attacks in public, he sought help: “The hardest thing is to put your hand up and say I’m not quite right.”

In his psychologist’s office there is a chair next to the wall. “I said 'I bet the cops always sit there'. He laughed and said 'Yeah, always’.

“I have worked with some amazing people and had a marvellous time. The job took me around the world, but there is a price to pay.”