Dubai: The United States has pledged to send vaccine materials and other medical relief to India, which is enduring the largest coronavirus outbreak of the entire pandemic, and running out beds, oxygen and testing kits.

“Just as India sent assistance to the United States as our hospitals were strained early in the pandemic, the United States is determined to help India in its time of need,” President Joe Biden tweeted on Sunday (Monday AEST).

Indian Prime Minister Narendra Modi, delivering his monthly radio address, urged people to get vaccinated because the devastating new wave of infections threatened to overwhelm the nation’s health services. Meanwhile, details emerged of the government’s efforts to block criticism of its response to the outbreak.

India weathered a surge in September that approached nearly 100,000 new infections a day, then numbers dropped significantly, creating the impression that the country was defeating the virus.

The number of new cases has exploded to new highs since last month, topping 300,000 each the past four days. Sunday’s count of 349,691 new cases in the previous 24 hours was the most for any country in a 24-hour period. 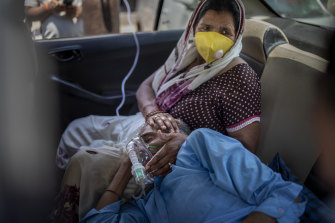 Experts caution that the figures are underreported in the nation of more than 1.3 billion people.

Analysts blame the surge on the arrival of new coronavirus variants in a country that had settled into a degree of complacency, lifted restrictions and returned to old habits.

“Covid is testing our patience and capacity to bear pain,” Modi said Sunday. “After successful tackling the first wave, the nation’s morale was high. However, this storm has shaken the nation.”

Calls for the United States to provide more help have mounted in recent weeks. The head of India’s largest vaccine manufacturer asked the United States this month to lift a ban on exporting raw materials for vaccines that was introduced under Trump and preserved by the Biden administration.

“I don’t think we can walk away from that,” Fauci, the head of the National Institute of Allergy and Infectious Diseases, told George Stephanopolous on ABC’s This Week before the National Security Council announcement.

The US Development Finance Corporation is funding a “substantial expansion” in manufacturing capability to enable the Indian vaccine manufacturer Biological E to produce at least 1 billion vaccine doses by the end of 2022, she said, and the government is sending a team of public health experts to work with Indian authorities. 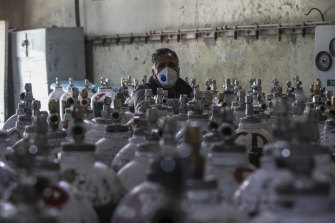 “Our hearts go out to the Indian people in the midst of the horrific COVID-19 outbreak,” Secretary of State Antony Blinken tweeted late on Saturday (Sunday AEST). “We are working closely with our partners in the Indian government, and we will rapidly deploy additional support to the people of India and India’s health care heroes.”

European Union Commission President Ursula Von der Leyen tweeted on Sunday that the bloc was “pooling resources” to respond rapidly to an Indian request for help. Janez Lenarcic, European commissioner for crisis management, wrote that the European Union was coordinating with member states to provide oxygen and medicine.

Many countries have provided aid. Singapore sent oxygen containers to India on Sunday. Germany was airlifting 23 mobile oxygen-generation plants to the country.

India worked with private companies to ship 80 metric tons of liquid oxygen from Saudi Arabia, the Indian Embassy in Riyadh announced on Sunday. China and Russia have offered help. And Pakistan is ready to give ventilators, digital X-ray machines, protective equipment and other supplies to India, Pakistani Foreign Minister Shah Mahmood Qureshi tweeted on Sunday.

“We believe in a policy of #HumanityFirst,” Qureshi wrote in what appeared to be a thinly veiled jab at the United States.

The surge has devastated India’s health infrastructure. Hospital beds in the capital New Delhi and other hard-hit cities are scarce and patients have died when oxygen supplies have been disrupted or run out. Delhi’s Chief Minister, Arvind Kejriwal has extended the city’s lockdown another week until May 3.

Modi, in his radio address, spoke with a doctor from Mumbai, Shashank Joshi, who suggested that the surge was manageable and urged against panic.

“The second wave came very fast. It is spreading faster,” the physician said. “But the recovery rate is also faster. In this phase, young people and children are also being infected.”

Cities are reporting high positive rates for coronavirus tests. In Delhi, one in three people tested are positive; in the eastern city of Kolkata, it’s one in two.

The Indian government is moving to vaccinate people as quickly as possible, but the size of the population makes the task daunting.

On Sunday, the Health Ministry said more than 140 million vaccine doses had been administered in 99 days.

Modi said anyone over the age of 18 will be eligible for the vaccine starting May 1.

The government has moved to silence critics on social media, according to documents published by the Lumen Database, a transparency initiative run by Harvard University. The documents show that officials filed requests Thursday and Friday, asking Twitter to remove 52 tweets, citing India’s Information Technology Act of 2000. The move was first reported by Indian news site MediaNama, which said users in India could no longer access the tweets.

Some of the tweets appeared to include false information about the virus, but many were critical of the government. One, by actor Vineet Kumar Singh, called attention to test shortages. Another, by West Bengal Minister Moloy Ghatak, juxtaposed photos of mass cremations with images of Modi speaking and a large crowd with the caption, “When death bodies were burning, Nero was busy doing election rallies.”

“India will never forgive PM @narendramodi for underplaying the corona situation in the country and letting so many people die due to mismanagement,” he tweeted.

Among the users whose tweets the government asked Twitter to block were a member of parliament and journalists.

“When we receive a valid legal request, we review it under both the Twitter rules and local law,” a Twitter spokesperson wrote in an emailed statement Sunday. “If the content violates Twitter’s Rules, the content will be removed from the service. If it is determined to be illegal in a particular jurisdiction, but not in violation of the Twitter rules, we may withhold access to the content in India only.”

In all cases, the spokesperson wrote, Twitter notifies the account holder directly so they’re aware that it has received a legal order.”

On Sunday, Pawan Khera, national spokesman for the Indian National Congress, the country’s largest opposition party, filed a legal notice against India’s IT minister, arguing that censorship of his tweet questioning a government decision to allow mass gatherings was “an abuse of regulatory power” and unconstitutional.