Prince Philip’s daily routine: How Duke of Edinburgh listened to BBC Radio 4 at breakfast on his old Roberts radio, enjoyed the occasional lager with his lunch and would sit down for relaxed dinner with the Queen

Each morning, Philip would seat himself ready for breakfast at a table laid out by Palace servants in keeping with royal habits.

The duke would expect to see his old Roberts radio positioned exactly on his right, just between the yoghurt and the fruit bowl.

Cereal and porridge oats were kept in Tupperware boxes and two types of marmalade and a bottle of maple syrup would be in place.

Philip listened to BBC Radio 4 on his wireless, while the Queen fed her toast to the corgis.

While it was well known that the Queen is a creature of habit, details of the Philip’s daily routine show the monarch’s husband also organised his day in quite a ritualistic manner.

The secrets of the Duke’s first meal of the day were exposed by a Daily Mirror reporter in 2003 after he breached Palace security to get a job as a footman. 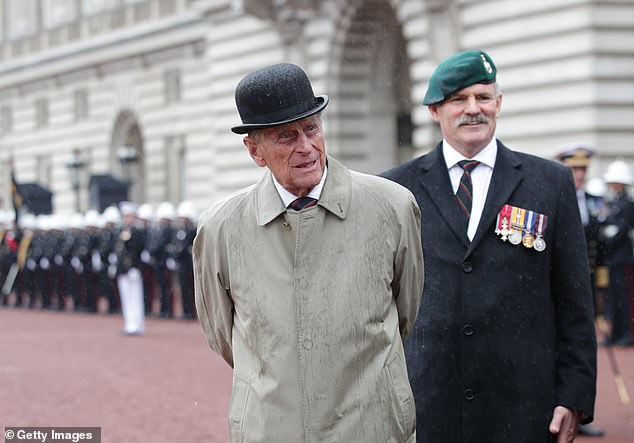 While it was well known that the Queen is a creature of habit, details of the Philip’s daily routine show the monarch’s husband also organised his day in quite a ritualistic manner. Pictured: Philip making his last royal engagement with the Royal Marines

Breakfast was served at 8.30am each day in the Queen’s private, first-floor dining room overlooking Buckingham Palace’s garden.

A thick white napkin embroidered with the EIIR emblem would be folded on the table next to the plastic cereal containers.

It was perhaps the existence of these modest tubs which generated most surprise among the public.

Each item on the table had its exact position, all brought by a tail-coated footman, who followed detailed plans on where to put things.

Conversation would turn to the day’s official engagements but was often kept to a minimum. 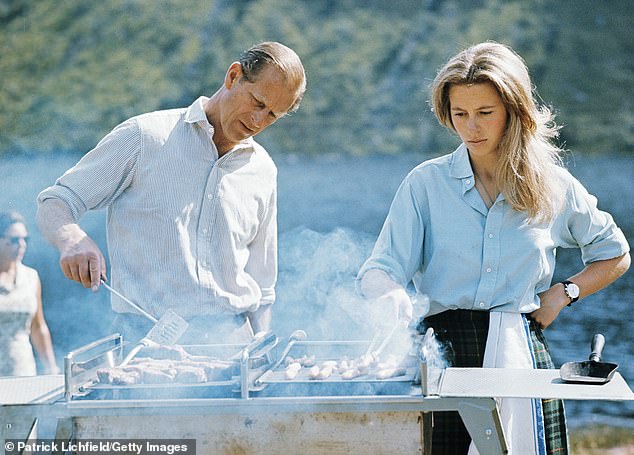 Philip ate almost anything, but avoided oysters on duty. He liked the occasional lager – rather than wine – with his lunch and enjoyed cooking on the barbecue (pictured with Princess Anne at Balmoral in 1972)

Philip apparently liked to start each day with a cup of coffee and a shower, in contrast to the Queen’s choice of Earl Grey tea and a bath.

After breakfast, the Queen would see to her correspondence and be briefed by her aides.

Depending on his diary, during his years of royal service before his retirement, the duke would carry out a variety of solo visits in the week or support the Queen at her public appearances.

High tea would be served back at the Palace at 5pm including sandwiches, scones and Dundee cake.

Dinner, when there were no guests and no public engagements, was a relaxed affair for the Queen and Philip. 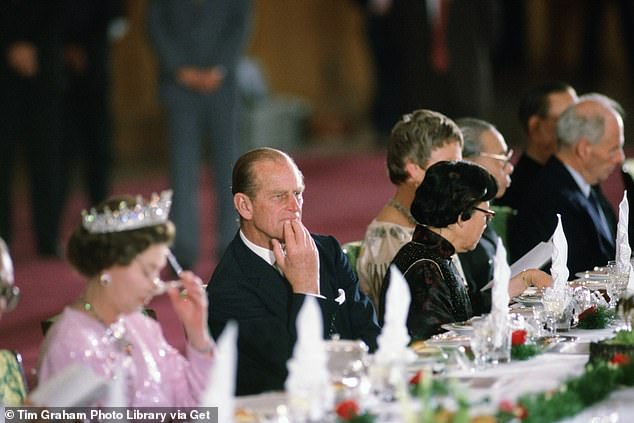 Dinner, on occasions when there were no guests and no public engagements such as state banquets, was a relaxed affair for the Queen and Philip

They preferred to change into comfortable clothes rather than formal wear.

Philip ate almost anything, but avoided oysters on duty.

He liked the occasional lager – rather than wine – with his lunch and enjoyed cooking on the barbecue. Sources have suggested that his bitter of choice was Boddingtons.

Such was Philip’s dedication to royal engagements during the days, that is believed he developed a curious nighttime habit as a result.

Pamela Hicks, the Queen’s Lady-in-Waiting, revealed in an ITV documentary that Philip started to ‘sleep wave’ as a result of all his hand waving.

While taking part in the Coronation tour in the 1950s, the Queen and Prince Philip would spend all day waving to their well wishers as they were driven around on their tours. 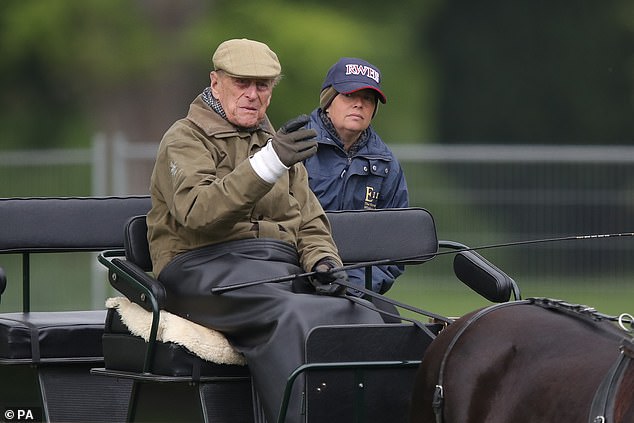 In his later years, he spent much of his time at Wood Farm on the outskirts of the Queen’s private Sandringham estate in Norfolk

In an extract from her diaries, Lady Hicks said: ‘When the Duke started waking up in the morning with a cold hand, there were initial fears that he might be suffering from a medical condition.

‘However, it soon transpired that Prince Philip had simply been waving in his sleep.’

In 2016, when he celebrated his 95th birthday, the duke still carried out 219 engagements, but none of them abroad.

In May 2017, it was announced he was retiring from public duties after the summer.

The duke kept busy behind the scenes with meetings, events and hobbies.

In his later years, he spent much of his time at Wood Farm on the outskirts of the Queen’s private Sandringham estate in Norfolk

He used his time to read, paint and host friends.