Weather forecasters have released an extreme heat warning for the UK today, anticipating sky-high temperatures as the heatwave continues. Red warnings expect 40C widely, with temperatures reaching upwards of 41C and even 43C in the southeast, breaking records by nearly 5C. The country is parched, and the rain it desperately needs could come as early as this week.

When will it rain?

Most areas will see the mercury close in on 40C on Monday and increase again on Tuesday, July 19, before significantly declining on Wednesday, July 20.

The first rain should come as the temperatures intensify, with weather charts showing showers across the southwest and northwest England. 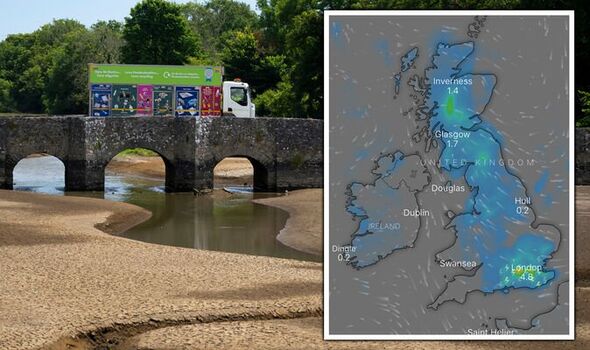 Maps from WXCharts show the first few showers hitting the southwest via Wales during the early hours of July 19.

Wales and traditionally rainy Bristol should see showers at 12am on Tuesday, bit only briefly, as they will quickly work their way along the coast to the north.

The showers should arrive in North Wales, Manchester, and several surrounding areas by 3am.

They will ultimately pass off the east coast at Newcastle by 6am before a second system forms around Plymouth from 9pm that evening to 12am on July 20. 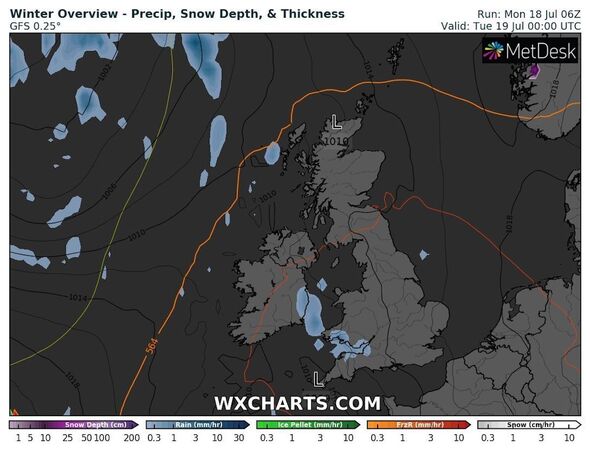 Charts from Windy show the nighttime rain will likely arrive stormy, accompanied by lightning and thunder provoked by the heat.

Another rainy system should follow on Wednesday when temperatures descend by nearly 10C to around 27C countrywide.

Maps show the rain will cover the country diagonally in a belt stretching from Plymouth in the west to Hull on the east coast.

Similar showers will dot eastern England and much of Scotland until Friday, when forecasts expect the most severe rain. 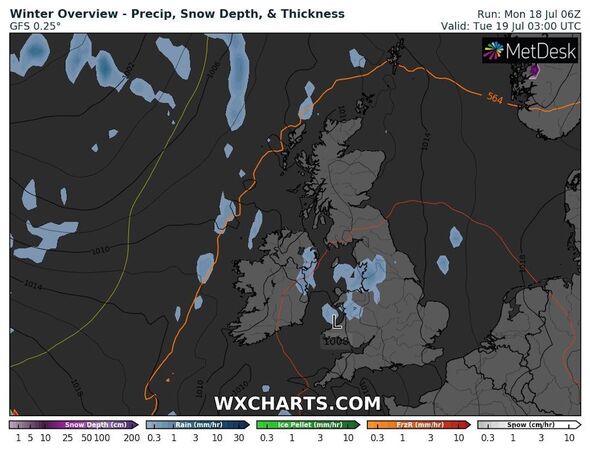 According to Windy, the most severe system of the week should arrive on July 22 on the south coast.

Charts from the weather service show a red dot covering Chichester, Portsmouth and Worthing from 8am.

There, rain totals could exceed 20mm (0.7 inches) for three hours until 11am, potentially emptying up to 2.1 inches of rain onto parched land.

The system will gradually move east, becoming larger and thundery as it passes over London and the southeast.

Rain should eventually move off the Kent coast by Friday evening at 6pm.

Throughout the rest of July, maps show rain primarily over Scotland and northern England, as southern Britain remains dry.

The agency warned of “a risk of some thunderstorms” between August 1 and August 15, while temperatures range from “near normal to rather warm”.