AMERICA'S First Lady has gone from living in a tower block in Communist Yugoslavia to being one of the world's most recognisable women.

But just who is Melania Trump and how did she meet her billionaire husband and US President Donald? Here's the lowdown. 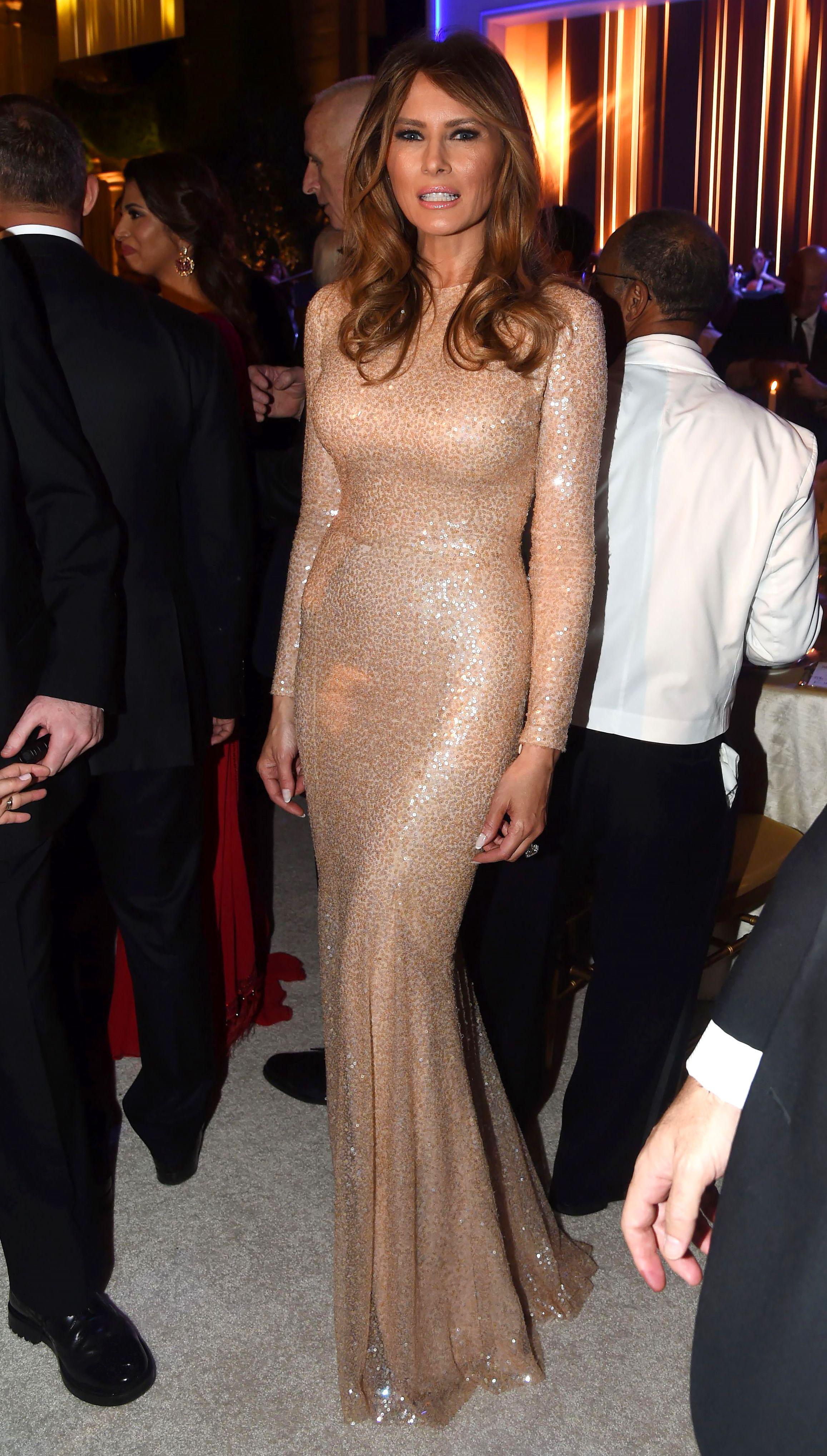 Who is Melania Trump and what nationality is she?

Donald Trump's third wife, born Melania Knauss, is the only First Lady to be born in a communist country.

She was born on April 26, 1970 and raised in a tower block in communist Yugoslavia (now Slovenia), making her only the second First Lady to have been born outside the United States after Louisa Adams, the English wife of President John Quincy, who left office in 1829.

She was later signed to a modelling agency in Milan, Italy, when she was 18 years old.

As a teen she went on to study architecture and design at the University of Ljubljana and later started travelling to Milan, where she signed on to an agency.

While in Italy, Melania — who changed her surname from Knavs to the more Germanic-sounding Knauss — was set on the path to meet her billionaire husband. 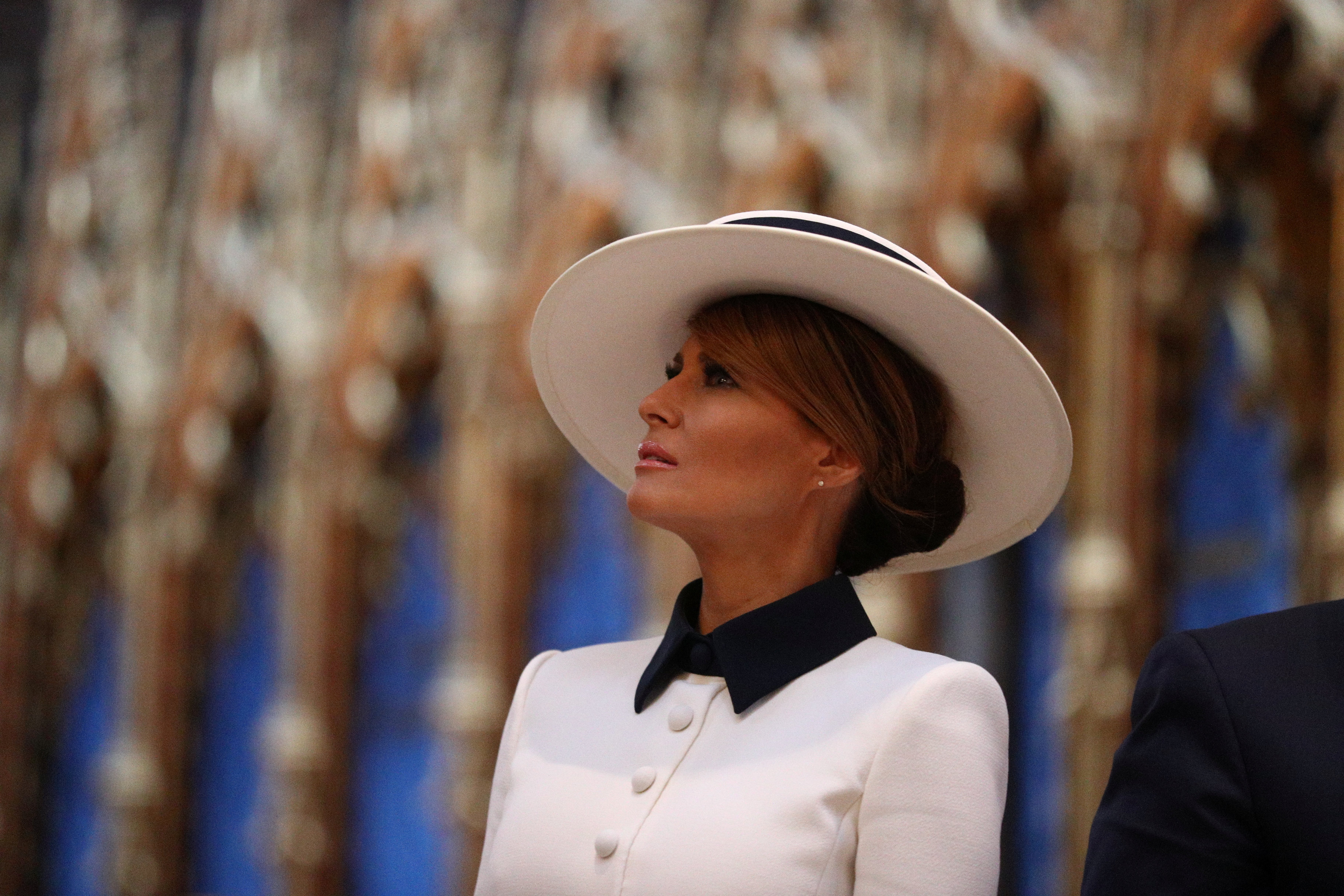 She moved to New York in 1996 on a work visa and has since appeared on the covers of New York Magazine, Vogue in Italy, Harper’s Bazaar in Bulgaria and GQ in the UK.

In 1995, she appeared in a lesbian-style shoot with fellow model Emma Erikson in which the pair posed naked alongside each other.

Three years later she started dating Donald Trump in 1998, before marrying him in 2005 and gave birth to their son, Barron, the following year.

Her husband described her as an "incredible" mother to their son Barron who she is lived with in New York until he finished the school year – the pair then joined Trump in Washington in June 2017.

She refers to him as "Little Donald" because of his love of wearing a suit and tie.

Despite being viewed as a trophy wife, insiders say she is key part of Team Trump and arguably the most powerful woman on Earth.

And at 5ft 11ins she is one of the tallest First Ladies in history.

After critics slammed her speech at the Republican National Convention when she appeared to copy Michella Obama word for word, Melania now claims she will tackle cyber-bullying. 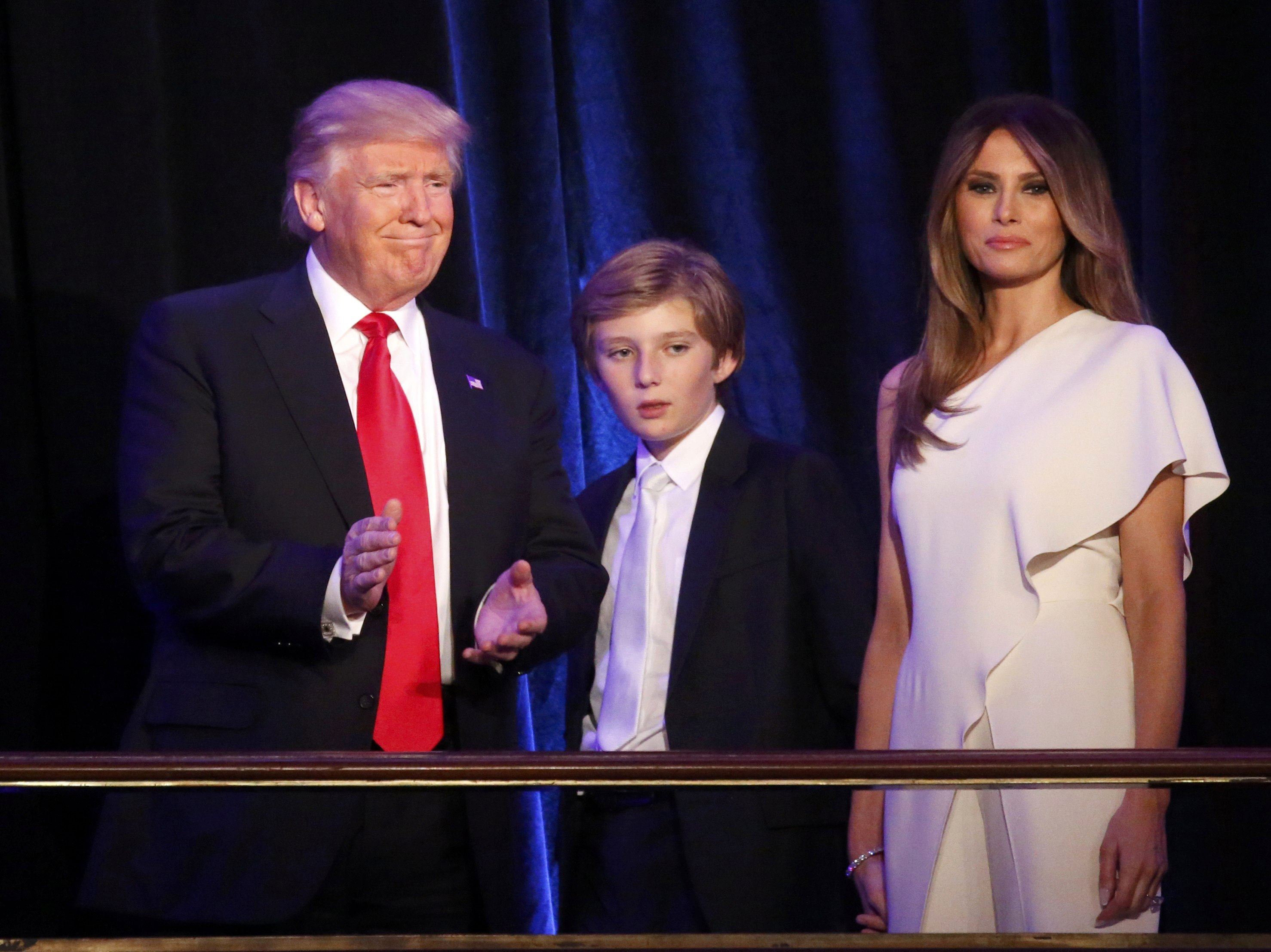 When did Melania marry Donald Trump?

Her best friend at the time, Edit Molnar, said Melania met the 52-year-old Mr Trump at a party at the Kit Kat Club during New York Fashion Week in 1998.

According to Molnar, the model was initially “turned off” by the billionaire.

“Melania said ‘He’s here with a woman. I am absolutely not giving him my number.’ She wouldn’t even consider it,” she told the New York Times.

Instead, Donald gave her all of his numbers — business and home — and she called him when she returned from a modelling trip.

They married in 2005 at a star-studded bash, which included Bill and Hillary Clinton, at Trump’s Mar-a-Lago estate in Florida. 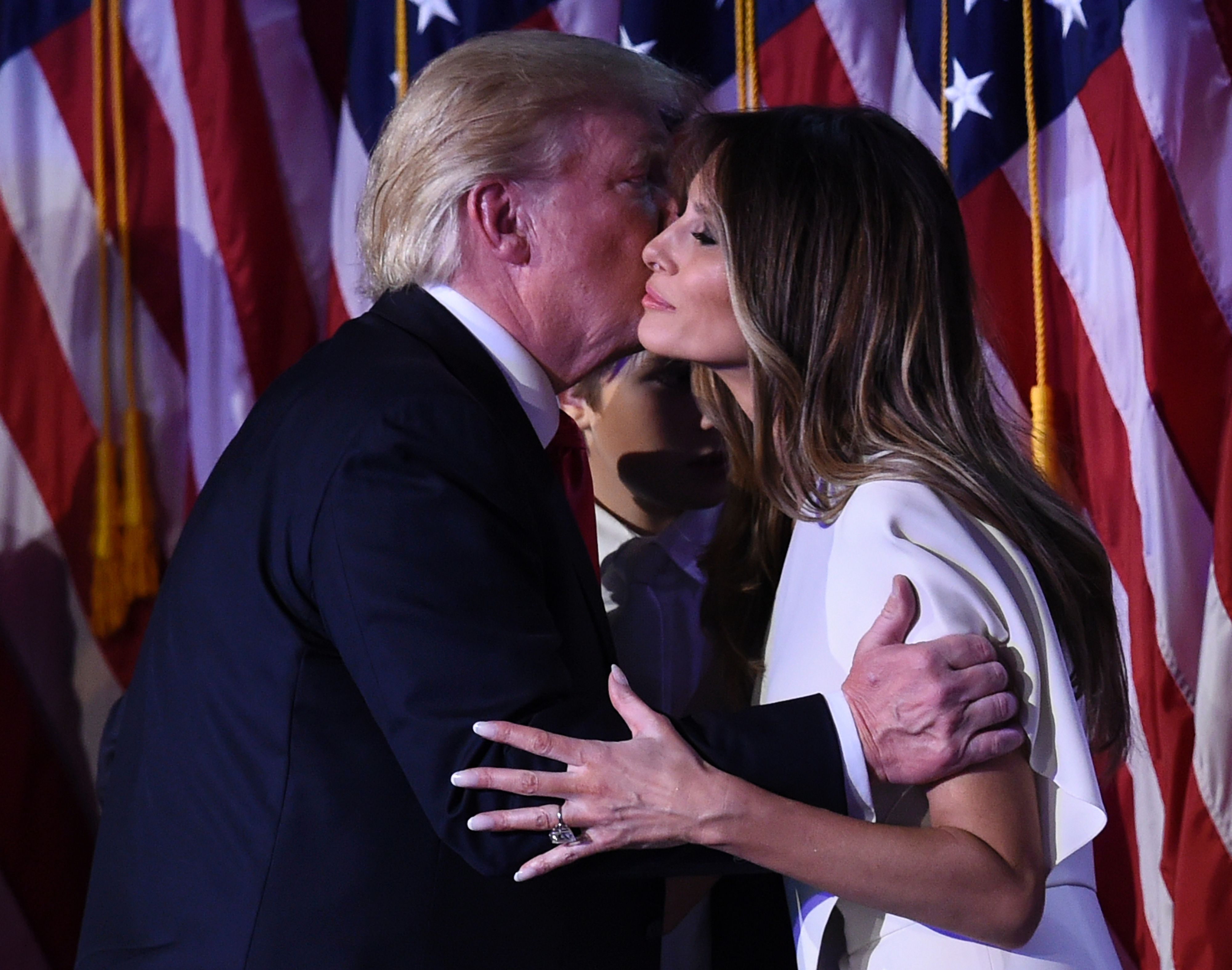 How is she getting on as First Lady?

Along with her son, Barron Trump, Melania has received intense flack from left-wing celebrities who do not agree with Donald Trump's firebrand manner and hard-line policies.

In particular, Trump's detractors have laid into her for being absent during public appearances.

Critics have also been keen to seize on her body language which they hope suggests Melania has fallen out her spouse.

But defiantly addressing supporters at the President's Florida rally, Melania said: “I will always stay true to myself and be truthful to you no matter what the opposition is saying about me.

“It is my honour and great pleasure to stand here before you as the First Lady of the United States.

“A nation committed to a greater civility and unity between people from all sides of the political divide."

When she appeared alongside her husband at the G20 summit in Germany, she was unable to leave the building due to chaotic protests.

In June 2018, her decision to wear a Zara coat featuring the words "I really don't care do u?" on a visit to a migrant child detention centre in Texas provoked outrage.

The PR disaster came just days after the US President made a U-turn on a policy to separate migrant children from their families at the US-Mexico border – one which had caused widespread outrage.

Mr and Mrs Trump arrived in the UK on July 12 for a four-day visit to the country. 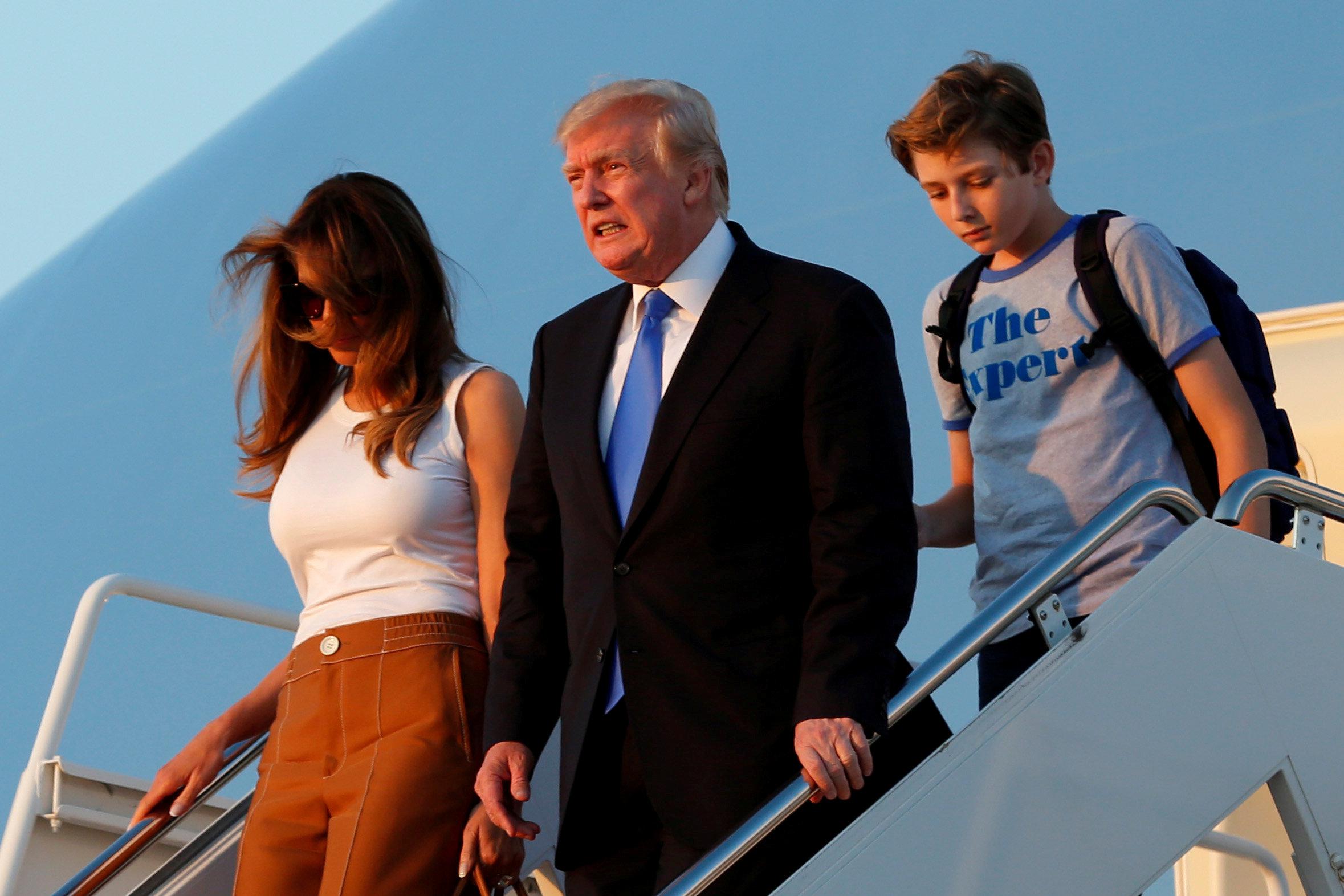 What is Melania Trump's net worth?

According to CelebrityNetWorth the 49-year-old is worth an estimated £39.5million.

In the early days of her romance with Donald, as her fame and modelling career soared, Melania brushed off suggestions she was a gold digger.

“The press could be sometimes very mean,” she told the Times. “But I think you can’t be with the person if it’s not love, if they don’t satisfy you."

Since marrying her billionaire husband, Melania has launched her own jewellery and watch line which she reportedly designs herself.

Photos of the Trump Tower penthouse suite she shared with Donald and Barron give her 900,000 Twitter followers a glimpse into their opulent Manhattan lifestyle.

The Louis XIV-style apartment is adorned with 24-carat gold and marble. There are crystal chandeliers and murals painted on the ceilings.

She launched her own line of jewellery in 2010 as well as putting her name to a range of skin care products.

Does Melania agree with her husband's politics?

Despite being an immigrant herself, Melania has been supportive of her husband's tough stance on migrants.

After the Republican Presidential candidate referred to some Mexicans immigrants as "criminals" and "rapists", the mother-of-one hit back at critics pointing out that Trump was talking about "illegal immigrants".

The model said she never broke the law while living here on a visa, telling MSNBC: "I follow the law. I never thought to stay here without papers."

In 2011, when Trump was pushing for President Obama to release his birth certificate, Melania — who became an American citizen in 2006 — backed up her husband in an interview with Joy Behar.

“In one way, it would be very easy if President Obama just show it,” she said.

“It’s not only Donald who wants to see it; it’s American people who voted for him and who didn’t vote for him.” 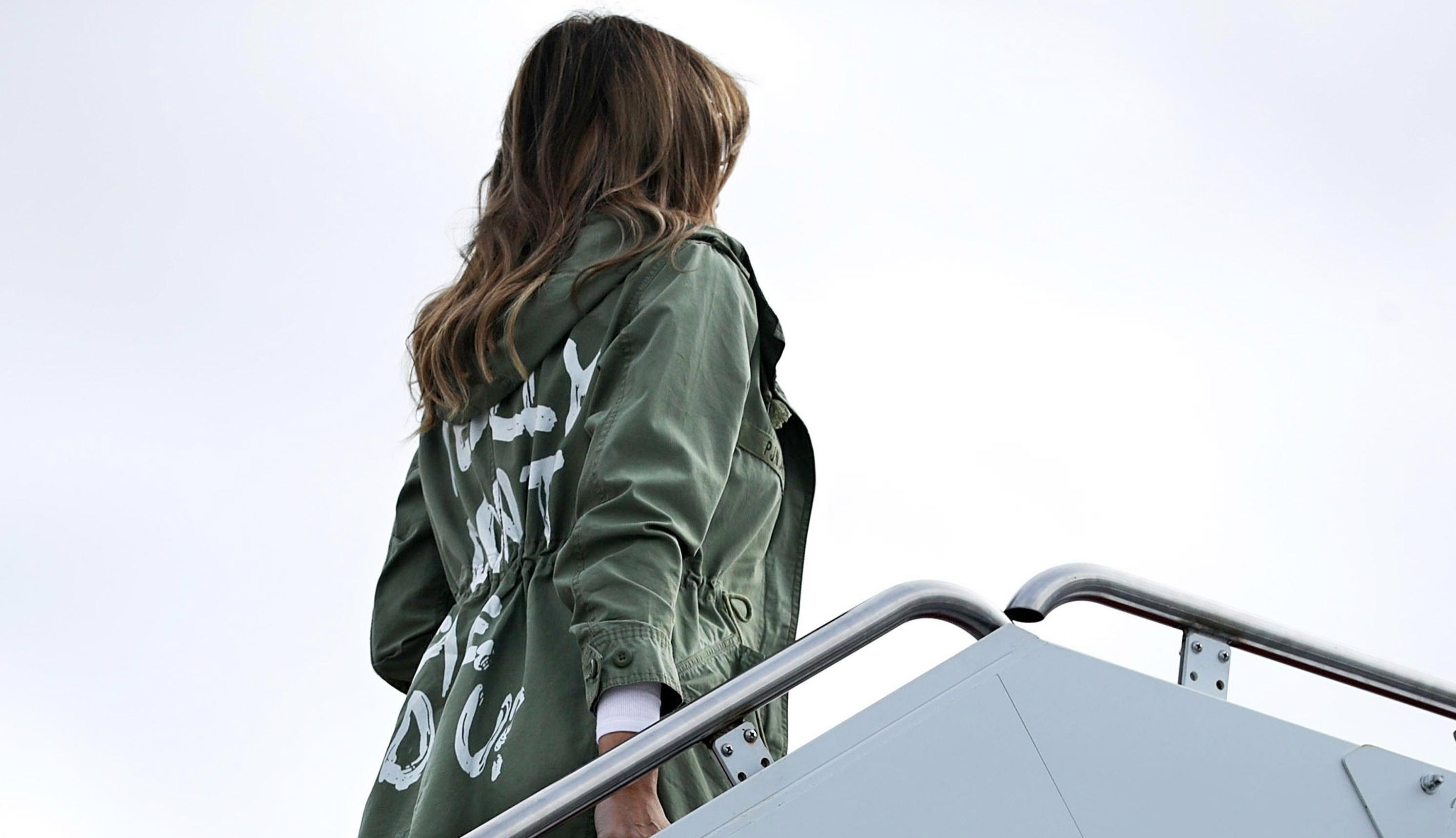 On June 21, 2018, Melania wore a jacket that read "I really don't care, do u?" as she boarded a flight to a facility housing migrant children separated from their parents.

The green, hooded military jacket had the words written graffiti-style on the back.

When asked what message the first lady's jacket intends to send, spokeswoman Stephanie Grisham said: "It's a jacket. There was no hidden message.

“After today's important visit to Texas, I hope the media isn't going to choose to focus on her wardrobe. "

Grisham underscored that message in a tweet with the hashtags #SheCares and #ItsJustAJacket.

Melania changed into a pale yellow jacket before the plane landed in McAllen, Texas, for a visit to the Upbring New Hope Children's Centre, which houses 55 migrant children.

What did she say in her ABC interview?

In an interview with ABC News in the US, Melania spoke candidly for the first time since Donald Trump's election to the White House.

A clip of the interview, filmed last week in Kenya, shows interviewer Tom Llamas saying: "It has been a tough year for you personally. You're not the first First Lady who has had to deal with her husband's alleged infidelities.

"Has this put a strain on your marriage?" Llamas asks. 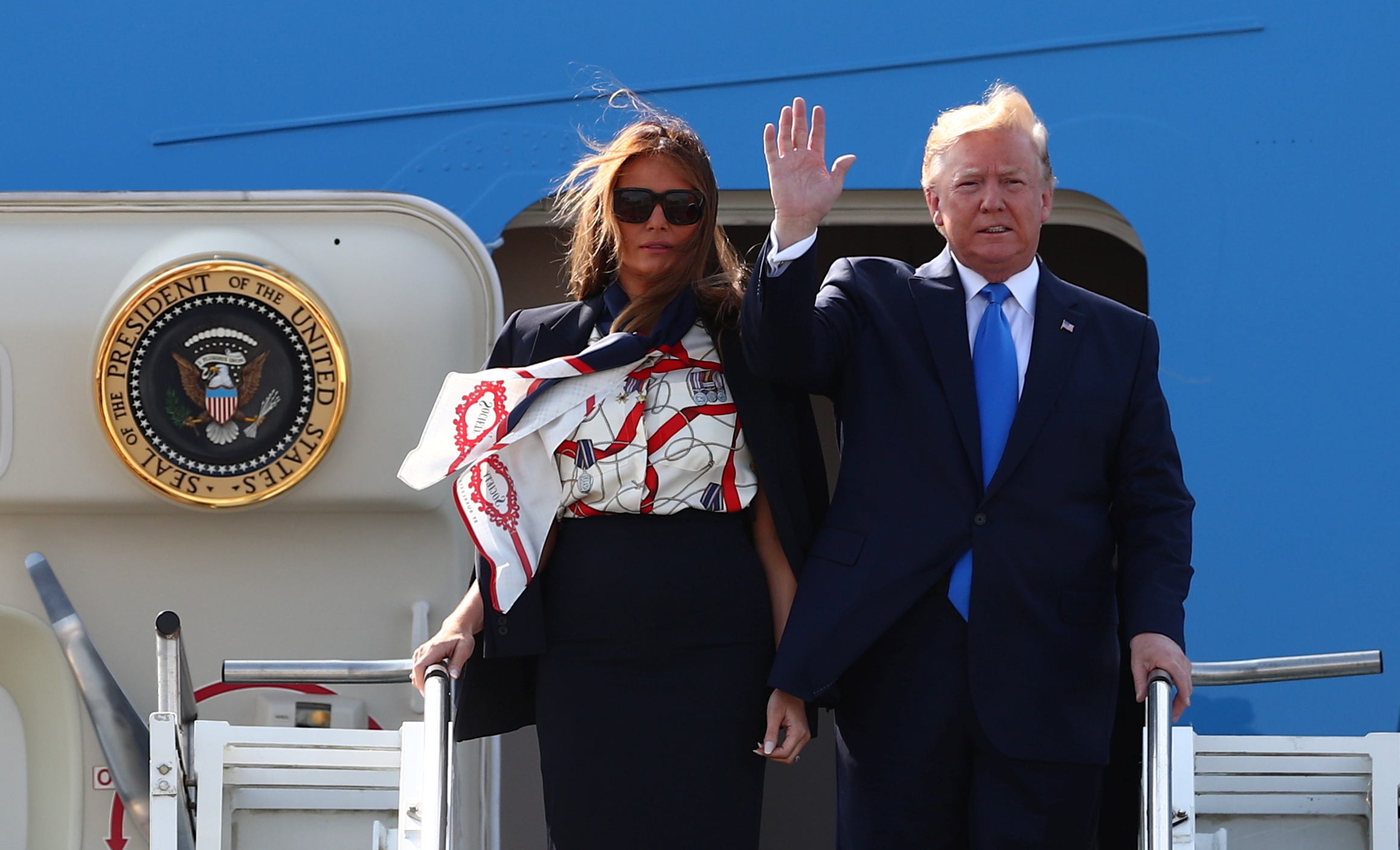 Melania says: "It is not a concern and a focus of mine… I am a mother and a First Lady and I have much more important things to think about and to do."

Llamas asks: "Have you been hurt though?"

After appearing to take a long pause, Melania answers: "Media… What is speculated. It's not always pleasant of course.

She continued: "I don't know [why he said that] you need to ask him."

Talking about her relationship with her husband she said: "We are fine, it's what the media speculate. It's gossip, it's not always correct."

She also revealed she started her anti-cyberbullying campaign because she's "the most bullied person on the world" and said she does not trust some people who have worked in the West Wing.

She added: "I could say that I'm the most bullied person on the world."

"You're the most bullied person in the world?" asked Llamas.

"One of them," replied Melania, "if you really see what people are saying about me."

On May 14, 2018 the White House released statement advising that the First Lady had undergone surgery to treat a benign kidney condition.

An embolization procedure was carried out at Walter Reed Hospital Military Medical Center and was a success.

"The procedure was successful and there were no complications.

"Mrs Trump is at Walter Reed Hospital Military Medical Center and will likely remain there for the duration of the week.

"The First Lady looks forward to a full recovery so she can continue her work on behalf of children everywhere."

On June 5, 2018, Melania made her first public appearance in almost a month following the surgery.

She put on a united front with her husband at a reception honouring military families and quickly cleared up any speculation over her whereabouts.

The First Lady tweeted: "I see the media is working overtime speculating where I am & what I'm doing.