White supremacist Richad Spencer voted for Joe Biden and Tweeted ‘to hell with this libertarian ideology’ with a picture of his ballot paper.

Spencer, known for popularising the term ‘alt-right’, voted for Donald Trump in the 2016 presidential election.

But he withdrew his support for Trump after the drone strike that killed Iranian General Qassem Soleimani earlier this year. 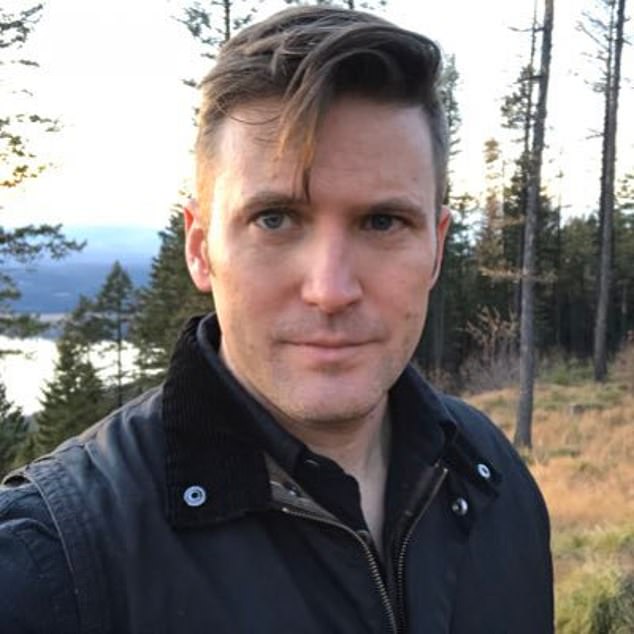 Later, Spencer said that the Republican Party had become ‘inneffective’ and declared his support for Biden.

Biden’s campain rejected Spencer’s support based on his past views, but that did not stop Spencer from voting for the Deocratic candidate on Tuesday.

‘I voted straight Dem,’ Spencer wrote in his tweet accompanying a picture of his ballot paper marked for the Biden-Harris ticket.

Spencer said in August that he intended to vote Democrat because ‘the liberals are clearly more competent people’ according to NewsWeek.

‘I’m on Team Joe,’ he said at the time. ‘The MAGA/Alt-Right moment is over. I made mistakes; Trump is an obvious disaster, but mainly the paradigm contained flaws that we now are able to perceive. And it needs to end.’ 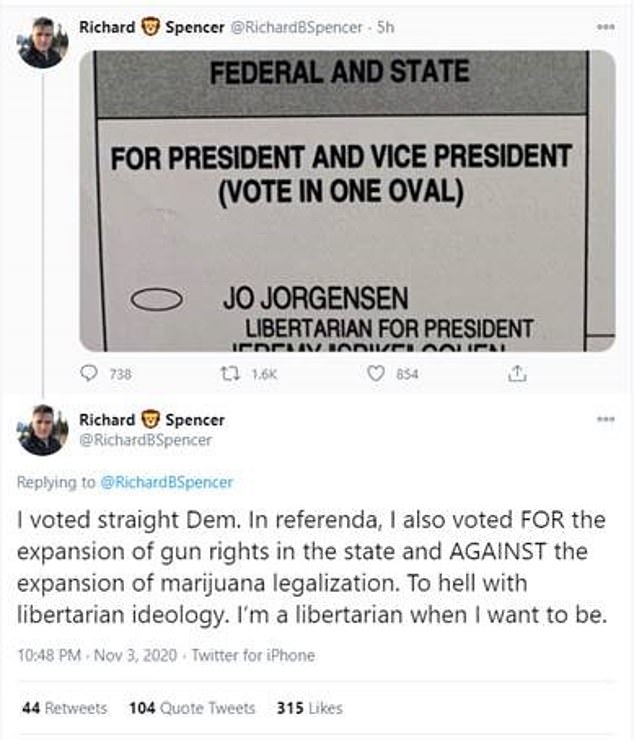 ‘I voted straight Dem. In referenda, I also voted FOR the expansion of gun rights in the state and AGAINST the expansion of marijuana legalization. To hell with libertarian ideology. I’m a libertarian when I want to be,’ Spencer wrote on Twitter with a picture of his ballot paper 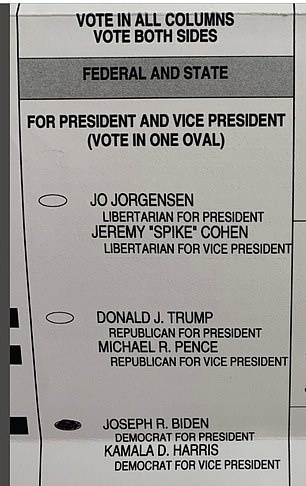 ‘When Joe Biden says we are in a battle for the soul of our nation against vile forces of hate who have come crawling out from under rocks, you are the epitome of what he means,’ Bates said in an August tweet.

‘What you stand for is absolutely repugnant. Your support is 10,000% unwelcome here.’

Following the killing of Soleimani in a drone strike launched by the U.S. military, Spencer distanced himself from the the GOP and even appeared to apologise to Iran for the attack.

‘After our traitorous elite is brought to justice,’ Spencer tweeted in January after the strike. ‘We hope to achieve peace, reconciliation, and forgiveness.’

Trump has sent mixed messages over his stance on white supremicists.

Following a clash between protesters at a Unite the Right rally in Charlottesville, Virginia on August 12, 2017 which led to the death of a counterprotester, Trump said there were ‘very fine people on both sides’ of the demonstrations.

He later clarified his potition, saying: ‘Racism is evil and those who cause violence in its name are criminals and thugs including the KKK, neo-Nazis, white supremacists and other hate groups that are repugnant to everything we hold dear as Americans.’ 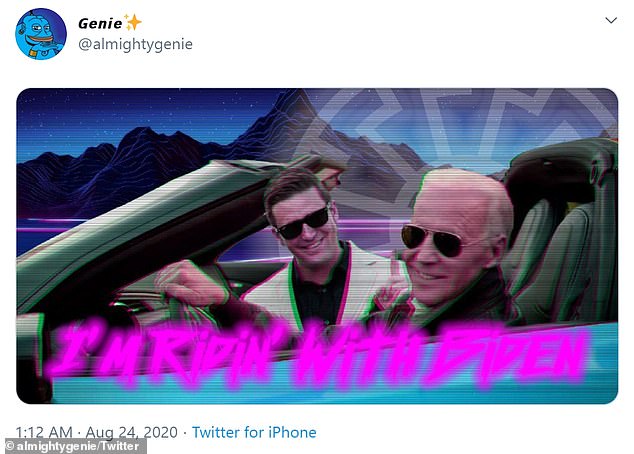 Spencer reveled in the surprise that his announcement made, retweeting memes of himself in August 2020 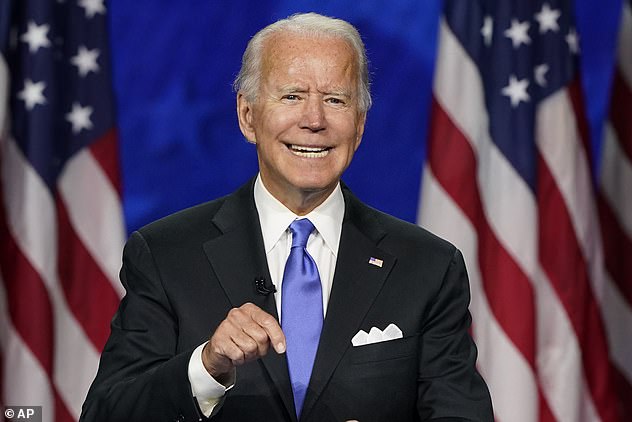 From 2011 he was based in Whitefish, Montana, from where he edited and published a new online magazine, Alternative Right, and soon took over the National Policy Institute – a white identity think tank.

Alt right support for the 2016 Trump campaign, and Spencer’s veneer of civility – largely avoiding crude slurs and the markers of previous neo-Nazi subcultures – allowed Spencer to gain media coverage and a hearing in some mainstream outlets. 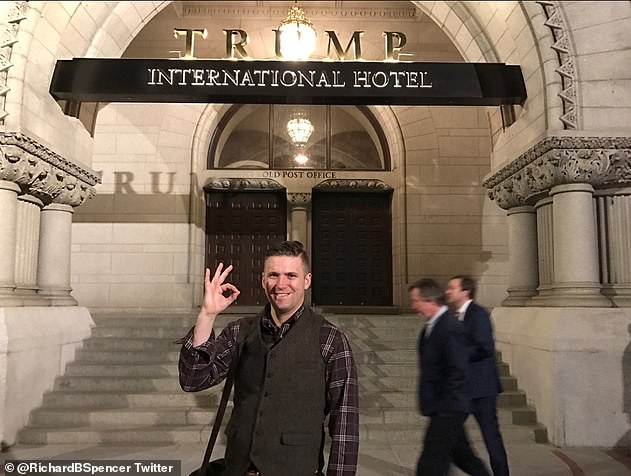 Before the 2016 election, Spencer wrote on Twitter: ‘We have a candidate for President who’s demystifying ‘racism’ and the financial power structure.

‘No matter what happens, I will be profoundly grateful to Donald Trump for the rest of my life.’

Spencer shot to national attention in 2016 after shouting ‘Hail Trump!’ and being greeted with Nazi salutes at an event in Washington shortly after Trump was elected.

On Inauguration Day, his profile only rose when he was punched in the head during a live television interview with an Australian broadcaster. 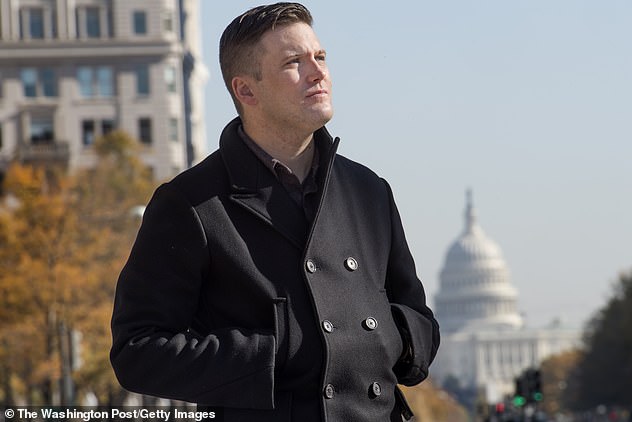