Dressed in black and wearing the diamond wedding ring her husband slipped on her finger a little over a month ago, the widow of slain Italian police Officer Mario Cerciello Rega moved mourners to tears on Monday, offering a painful goodbye to her husband of just 43 days in the same church they were married in.

Rosa Maria Rega had celebrated the happiest day of her life on June 19 when she and her husband recited their marriage vows at the Santa Croce di Santa Maria del Corso church in Somma Vesuviana near Naples.

But on Monday, she endured the saddest day of her life as she read a piece at her husband’s funeral titled, “Being the wife of a Carabiniere.”

Just feet from her sat a casket bearing the body of her husband, a beloved member of Italy’s famed Carabiniere paramilitary police force, who died on Friday after being stabbed 11 times on a street corner in Rome during an alleged confrontation with two California teenagers, both now charged with his murder. 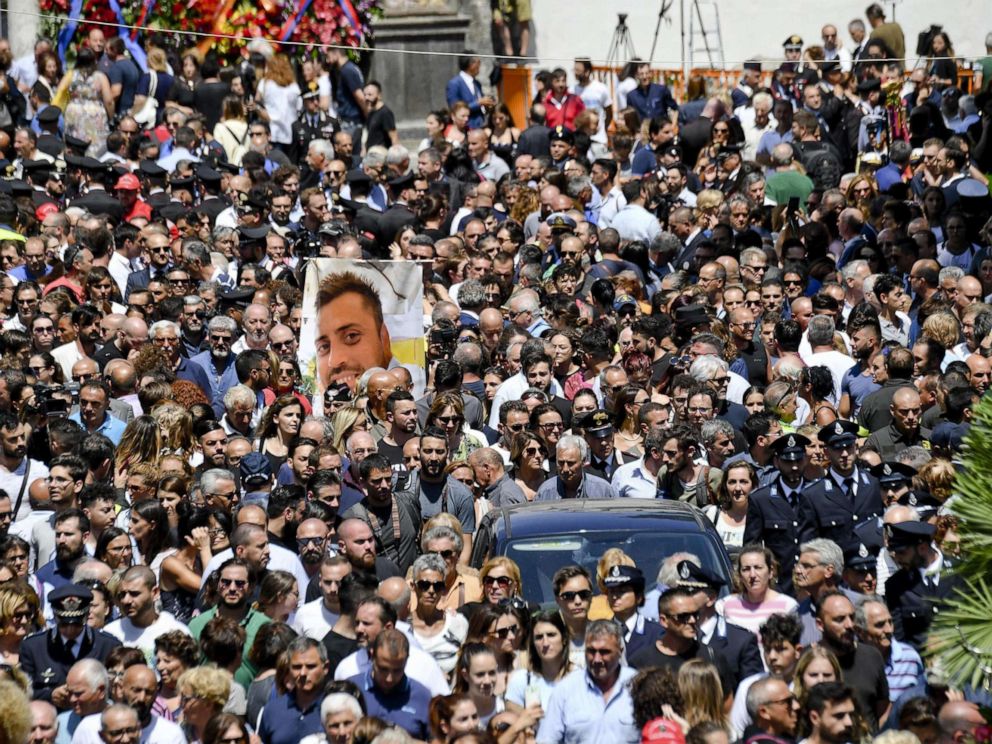 His death occurred just days after he returned to duty from his honeymoon in Madagascar.

Deputy Brigadier Cerciello Rega’s wooden casket was wrapped in an Italian flag. His Carabiniere uniform cap and sword were placed atop the casket, along with photos of him and his newlywed wife smiling.

At the foot of the casket stood a blown-up photo of the 35-year-old officer wearing his dress uniform and medals of honor he had been bestowed during his career on his chest.

“If we all are able to learn a sense of the State and of common good from men like Mario, Italy will rise up,” Monsignor Santo Marciano told the mourners who packed the church and thousands more who stood outside listening to the service on loudspeakers or watching a broadcast of the funeral on national TV.

Among those attending the funeral were two of Italy’s deputy prime ministers, Luigi Di Maio and Matteo Salvini. On Sunday, Italy’s prime minister, Giuseppe Conte, joined thousands of people who gathered at a chapel in central Rome to honor Cerciello Rega as his body lay in repose.

Conte called the officer’s death a “deep wound for the State.” 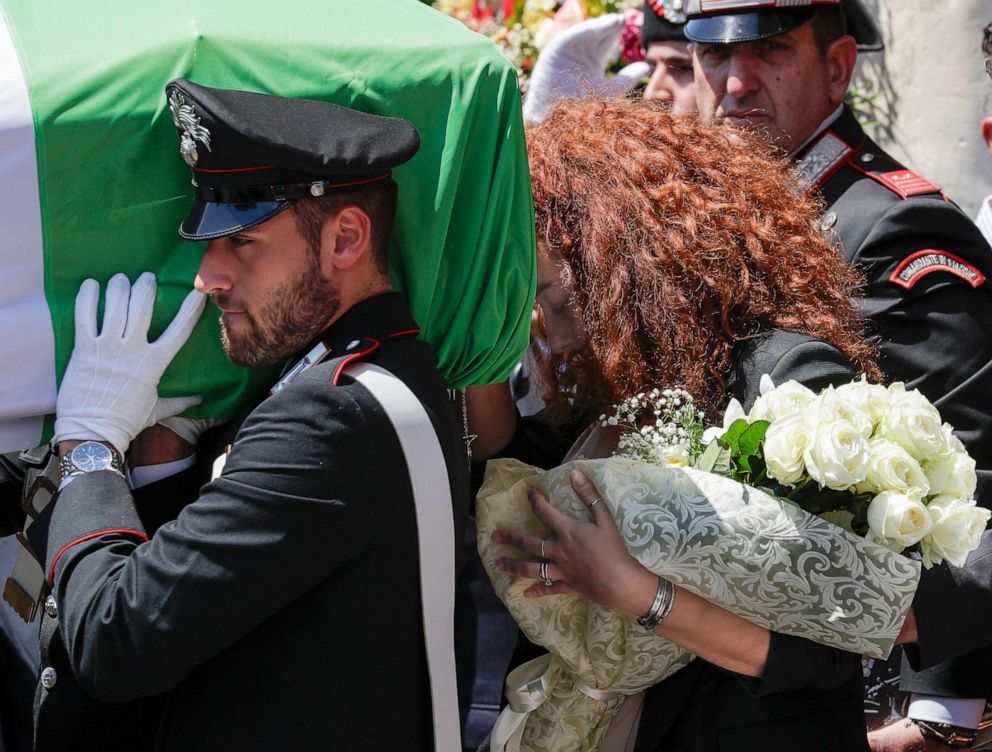 Gen. Giovanni Nistri, commander of the Carabiniere force, spoke at Cerciello Rega’s funeral, telling mourners that the officer died to “protect the rights of everyone, including those of an arrested person.”

“Together we asked for respect for all the other Carabiniere who do the same job,” Nistri said.

Cerciello Rega’s colleagues served as pallbearers, hoisting his casket on their shoulders to carry him in and out of the church to loud applause from those who came to pay respect.

“We remembered Mario in tears, all the lovely things, the moments spent together,” Somma Vesuviana Mayor Salvatore Di Sarno told reporters outside the church. “But also the tragedy, a terrible affair which cannot go unpunished.”

Finnegan Lee Elder, 19, and Gabriel Christian Natale-Hjorth, 18, both of Northern California, remain in jail on suspicion of murder.

The killing unfolded about 3 a.m. Friday in Rome after police say Elder and Natale-Hjorth were allegedly involved in a botched street drug deal.

Elder and Natale-Hjorth, both graduates of Tamalpais High School in the San Francisco suburb of Mill Valley, were allegedly trying to buy 80 euros, or about $90, worth of drugs before the slaying, but were sold a fake substance, a police spokesman told ABC News. They then allegedly robbed a man who directed them to the drug dealer who ripped them off, taking his backpack and demanding he pay them 100 euros and a gram of cocaine to get it back, police said. 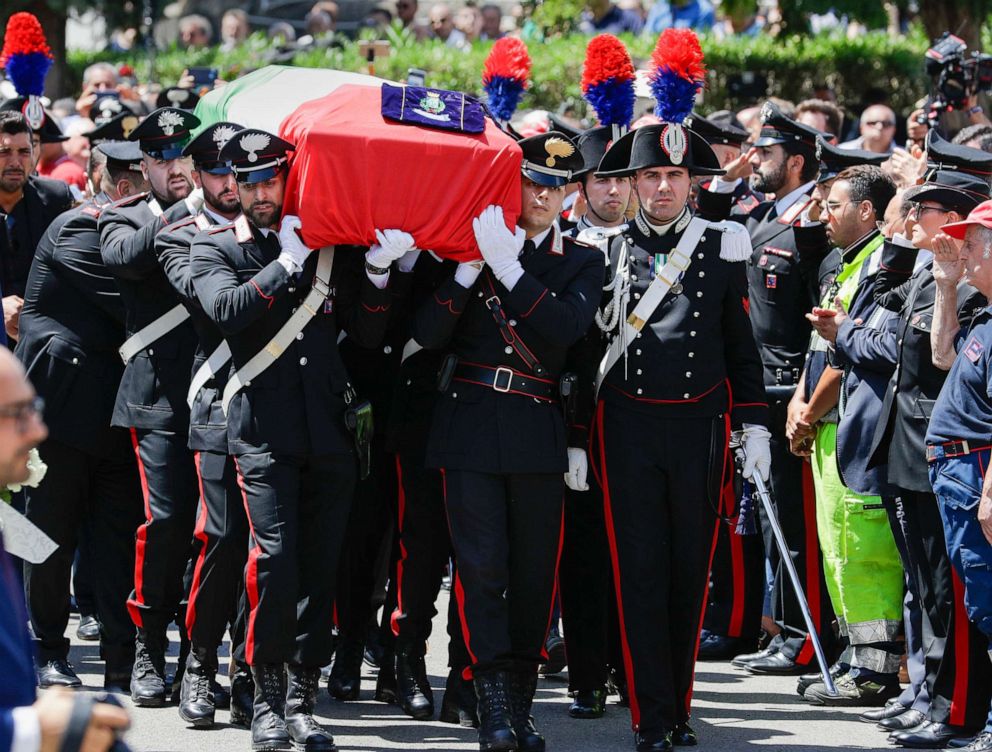 The victim later called his cell phone, which the suspects also stole and arranged to meet to get his backpack back, police said. Unbeknownst to the suspects, the victim had called the police to report he was being extorted, and Cerciello Rega and his partner, Andrea Varriale, were listening in on the phone call when the victim arranged a rendezvous with the suspects, according to a court document leaked to media outlets and obtained by ABC News.

Cerceillo Rega and Varriale went to meet the suspects, according to the document.

‘’We got closer and said we are Carabiniere security force, waving at the same time our police ID cards,” Variale told investigators, according to the document. “Before we were even able to proceed to any kind of check, we were physically attacked in order to prevent us from blocking them.”

Variale described a fight that broke out as “frenzied, very fast and violent,” according to the document.

“I was attacked by the man with the black hoodie that struggled, kicking, punching and scratching me to get himself free from my hold,” Variale said in his statement, referring to Natale-Hjorth. “Next to me, Cerciello Rega was fighting with the other man and I remember him screaming: ‘Stop, basta, we are Carabiniere.’

“After a few moments, I saw the two men running away and I noticed Cerciello bleeding abundantly from his chest,” he continued, according to the document. “Before falling on the ground he said: ‘They stabbed me.'”

During the four-minute encounter Elder allegedly stabbed Cerciello Rega repeatedly with a 7-inch fix-blade combat knife, according to the document.

The suspects were allegedly captured on security video running from the murder scene, but were tracked down to their hotel room about a block away, police said. Investigators found the knife believed to have been used in the killing and bloody clothes hidden in the ceiling of the teenagers’ hotel room, police said. 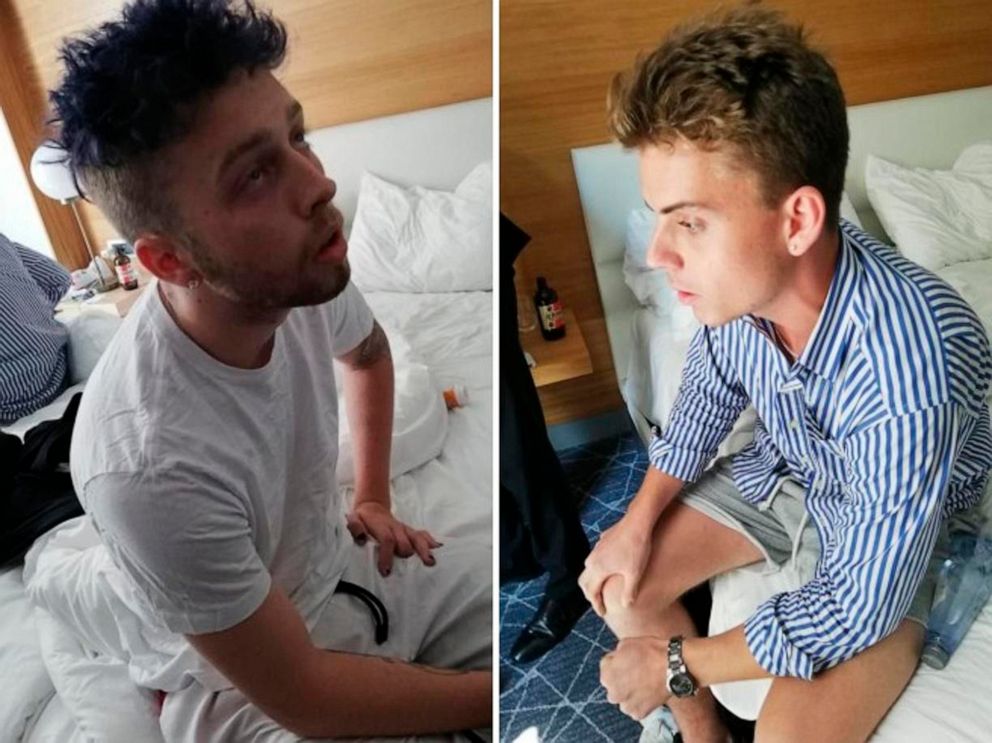 While under interrogation, Elder and Natale-Hjorth both confessed to their involvement in the homicide when “faced with overwhelming evidence,” according to the Provincial Command of Rome.

Elder claimed he allegedly stabbed Ceriello Rega in self-defense, telling investigators he “feared for his life,” according to the court document.

Investigators, according to the court document, concluded that “it’s clear that the perpetrator of the stabbing” was Elder.

“It’s also clear — from the number of stabs, the body parts chosen and the kind of weapon — that the murder was carried out voluntarily,” according to the document. “The attempt to present it as a self-defense act is not compatible with the facts.”

A judge hearing the case refused a request to release Elder and Natale-Hjorth while the investigation continues, saying, “There’s a danger of their repeating the same kind of crime” and citing the suspects’ “complete lake of awareness regarding the gravity of their actions.”

“Let’s not forget that both men were looking for drugs that night, and both admitted to having drunk alcohol,” the judge said, according to the court document. “These circumstances, along with their behavior, are a sign of a total absence of self-control of critical capacity that points to their high degree of danger to society.”

In a statement released over the weekend, Elder’s parents, who plan to travel to Rome, expressed “our deepest condolences” to Cerciello Rega’s loved ones, saying they “are shocked and dismayed at the events that have been reported.”

“As any parents would be, we are deeply concerned for our son and are heartened by the expressions of sympathy and support from our friends and neighbors,” the parents’ statement reads.

Elder’s court-appointed attorney, Francesco Codini, told ABC News that Elder’s family is working with the U.S. Consulate to hire a new lawyer for their son.

He said he spoke to Elder in jail Monday morning and said his client was “decidedly better” than when he first saw him on Saturday, when he seemed to be in a state of shock.

Defense attorney Emiliano Sisinni would only confirm to ABC News that he is representing Natale-Hjorth and was too busy Monday to answer further questions.