This is the astonishing moment a wild monkey was seen hand-washing clothes outside a house in Indonesia.

In the clip, Ayu Sarasyani had left a bowl full of dirty clothes soaking in water and detergent outside her home in South Kalimantan province.

But when she returned to finish off the chore, she was stunned to find a wild-long tailed monkey had stepped in to give her a helping hand.

Imitating how she scrubs dirt off the clothes outside her house, the primate begins by dipping the clothes in the water while perched on the edge of the large green bowl.

The monkey then lifts them out of the soapy water before scrubbing them, repeating the action several times.

At one point the clothes are spread out onto the concrete floor as the monkey gets knee deep into cleaning them with rigour. 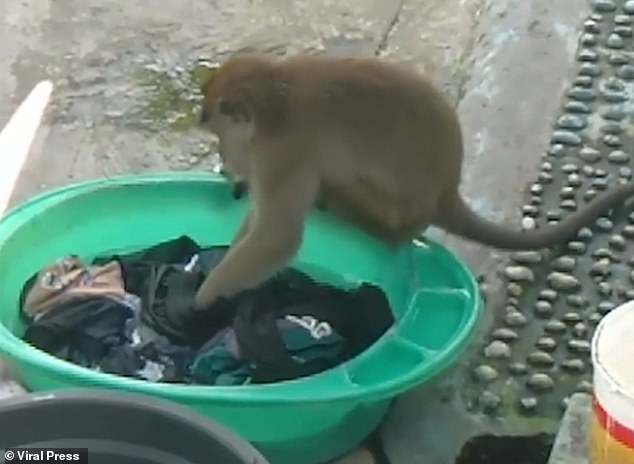 It gently pats the washing against the floor as if to dislodge any stubborn dirt or soap in the 40 second clip.

And unlike most of us, this monkey seems to be rather enjoying all the soap, scrub, soak, rinse, wring action of cleaning clothes which was shared on social media yesterday.

Ayu said: ‘I was amazed to see it taking over my work, but I immediately went inside the house and watched from my window.

The woman stayed inside while filming the unusual scene out of fear of being attacked in case the animal was startled.

Wild monkeys often come to the area and stay in empty buildings and houses while searching for food .

As this monkey was solo, Ayu believes the smart primate may have become separated from the group. 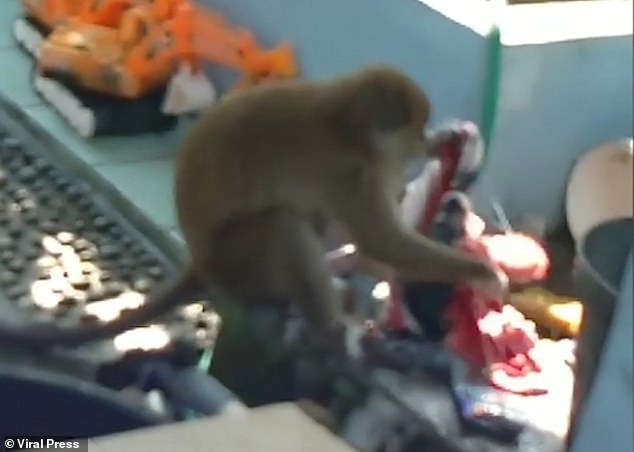 Like an expert, the primate spread the clothes out onto the concrete floor as it gets knee deep into cleaning them with rigour

She said: ‘They come here from time to time and stay for at least two days. They are usually in big groups but this one was alone, so it could have been lost.’

Ayu threw a piece of bread and banana to the monkey to distract it from the clothes before it left her front yard.

She also lodged an incident report to the local officials in case the monkey was lost and needed to be reunited with its group.