Wisteria hysteria! Beloved plant is dubbed a symbol of oppression and colonial conquest by Transport for London-funded sightseeing guide

Wisteria has ‘colonial roots’ and classifying plants as ‘exotic’ has ‘colonial connotations’, according to a sightseeing guide funded by Transport for London.

The guide through green spaces in Brixton, south London, says ‘exotic’ is an ‘outdated and offensive’ term to classify plants as it describes the ‘mysteriously foreign’.

The Brixton Botanical Map, which is part of the ‘Art on the Underground’ series, also suggests the horticultural terms ‘native’ and ‘invasive’ are offensive as they imply ‘histories of conquest’.

The guide encourages visitors to consider ‘gardens as places to consider injustice, oppression and colonial legacy’.

The authors explain that ‘colonial legacies’ are perpetuated in horticulture through language and so it is important to question the influence of ‘colonial language’ on our names for plants. They add that these consequences of colonialism ‘still affect who owns a garden today and who doesn’t’.

Among the problematic plants is Wisteria because it was ‘brought to England in 1812 by John Reeve, an East India Company tea inspector’. 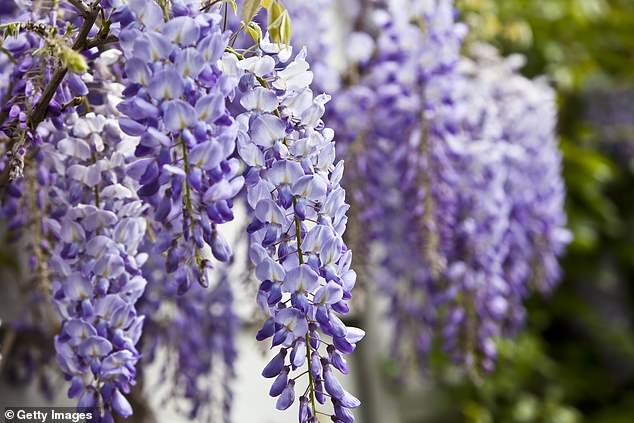 Wisteria has ‘colonial roots’ and classifying plants as ‘exotic’ has ‘colonial connotations’, according to a sightseeing guide funded by Transport for London

Plane trees are also highlighted as problematic, as the ones in the capital are hybrids of the Oriental Plane and ‘oriental’ is a ‘derogatory’ term to describe ‘people or objects from or characteristic of Asia’.

On the kid’s trail the authors of the map posed the questions: ‘Why might it be interesting to learn about plants from the perspective of other countries?’ and ‘Do you think it was helpful that they were given new names?’.

Historian Dr Zareer Masani told The Daily Telegraph: ‘The fact that the current craze to blame colonialism or slavery for almost everything has now reached our plants is a measure of how absurd things have become.

‘The obsession with this kind of political correctness has travelled from our statues and road names to the very food we eat, the clothes we wear, the language we use and now the flowers we enjoy.

‘One can only guess which new area of our lives is left for our new Puritans to attack next.’

In March, Kew Gardens vowed to show visitors how plants on display played a part in British colonialism and the slave trade.

The famous botanic gardens in London said it would change display boards for plants such as sugar cane – previously harvested by slaves – to highlight their ‘imperial legacy’.