As women across Victoria experience high levels of depression and anxiety, chief executives from the state’s 12 women’s health services will call on Treasurer Tim Pallas to include a large sum for gender-specific mental health services in the May 20 budget.

The members of Victoria’s Women’s Health Service Council say they would be “devastated” if their budget bid for $59 million, much of it for mental health support, is not met but believe it is unlikely to be. 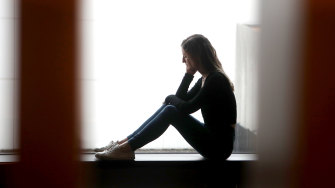 Women in Victoria are experiencing high levels of anxiety and depression and women’s health services say support must be funded in the May 20 budget.Credit:Sylvia Liber

In a statement to be released on Monday the CEOs will say “women in Victoria have higher rates of mental illness than men. In all but two local government areas across the state, anxiety and depression rates amongst women are significantly higher, with four rural and regional LGAs with over 50 per cent of women diagnosed with a mental health disorder.

“We would be devastated if, for the fifth year in a row, Treasury would enable an effective cut to women’s health services,” the statement says.

The leaders said they were disappointed that the recommendations of the Royal Commission into Victoria’s Mental Health System failed to identify the gender gap in mental health and to apply a gender lens to solutions.

Tanja Kovac, CEO of Gender Equity Victoria, said she had tried and failed several times for an audience with Mr Pallas to explain the urgency of funding for gender equality services across the state, especially women’s health services.

“We’re disappointed that Treasurer Pallas hasn’t made time for our members this year, especially given the national discussion on the importance of gender equality,” she said.

“We’re especially not happy about where the mental health royal commission landed in terms of its lack of gender analysis. We’ll be looking to see whether the government corrects that by providing dedicated women’s mental health funding.

“Large sums of money become meaningless if they don’t go to the right services. In every single local government area in Victoria, bar two, anxiety and depression and other mental health issues among women eclipse those among men significantly.”

A pre-budget submission to Minister for Women Gabrielle Williams by Tricia Currie highlighted statistics that more than a third (35 per cent) of Victorian females are experiencing moderate to severe levels of depression compared with 19 per cent of males.

It noted a 2800 per cent increase in demand at the Women’s Mental Health Clinic at The Alfred hospital in one month in 2020.

Ms Currie said the royal commission into mental health, handed down in March, failed to identify the gender gap in mental health needs and “failed even more deeply to apply an intersectional gender lens”, she said.

When the findings of the royal commission were handed down, Victoria’s Women’s Health Alliance said it was disappointed the findings “did not address the specific needs of women and girls”.

“We know women and girls experience higher rates of mental ill-health than men and boys for a range of reasons, so we were surprised not to see this reflected in the … recommendations,” said Mischa Barr of Women’s Health Victoria and chair of the Women’s Mental Health Alliance.

A government spokesperson said “we’ve invested more in the health and safety of women than any government in Victoria’s history, including tens of millions of dollars directly into women’s health services and more than $3 billion to end the scourge of family violence”.

“We’re also rebuilding our mental health system from the ground up, implementing every one of the recommendations of the Royal Commission into Victoria’s Mental Health System.”

More would be said about support for women in the May 20 budget.

If you or anyone you know needs support call Lifeline on 131 114, or Beyond Blue’s coronavirus mental wellbeing support service on 1800 512 348.

Our Morning Edition newsletter is a curated guide to the most important and interesting stories, analysis and insights. Get it delivered to your inbox.