Your guide to the D-Day 75th anniversary commemorations: How the Normandy landings are being remembered this week on both sides of the Channel

Thousands of people will take part in D-Day commemoration events across the UK and France this week.

Hundreds of veterans, members of the royal family and US president Donald Trump will come together to remember what is considered one of the most important events of the Second World War and the biggest amphibious invasion in military history.

It coincides with President Trump’s state visit, which veterans have argued risks distracting people from the historic anniversary.

Veterans have already set off for France in large numbers to make it to Normandy in time for Thursday’s memorial services.

Here is your guide to the full list of events happening on both sides of the Channel to mark the 75th anniversary of the D-Day landings this week. 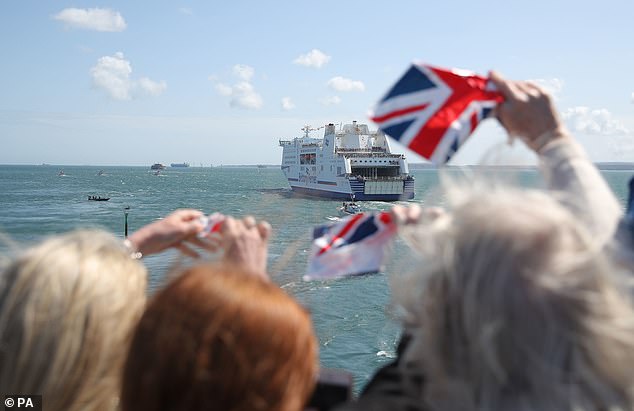 Dozens of Second World War veterans set sail from Portsmouth on Monday afternoon so they can get to Normandy for the 75th anniversary of D-Day on Thursday, June 6. Members of the public are pictured waving Union Jacks as they sail off 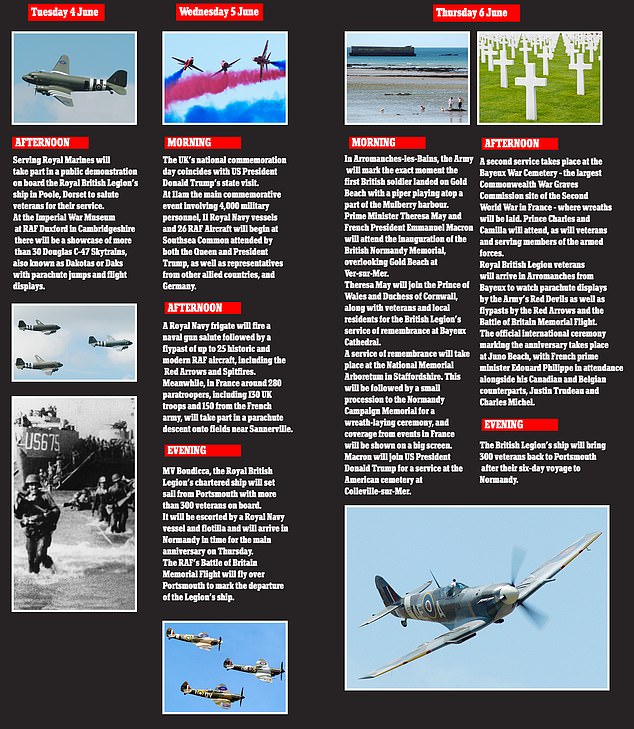 A tribute ferry and flotilla sponsored by the charity D-Day Revisited will set sail from Portsmouth to Caen, Normandy.

It will take more than hundred veterans to France in time for the anniversary on Thursday.

They will be escorted out of the port by five Navy vessels and 18 historical craft.

D-Day 75, an immersive performance of more than 100 people will take audiences back to 1944 in Newbury, Berkshire.

The performance at the 1010 Outdoor Arts Creation Space in Greenham Business Park will end with a celebratory tea dance and band performance.

There will be a second showing on June 5. 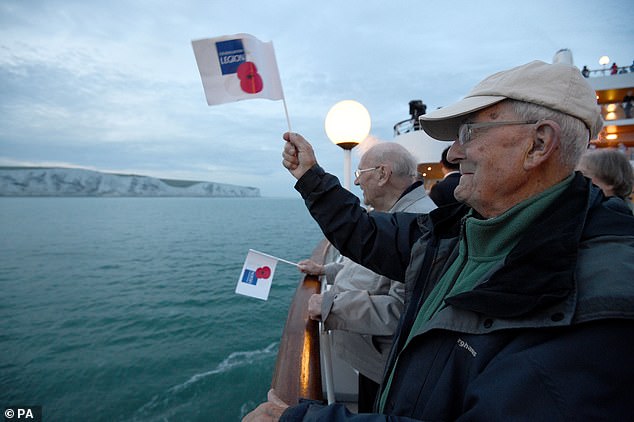 Veterans are pictured waving flags as the first boat, MV Boudicca, which is being sponsored by the Royal British Legion, left from Dover on Sunday evening 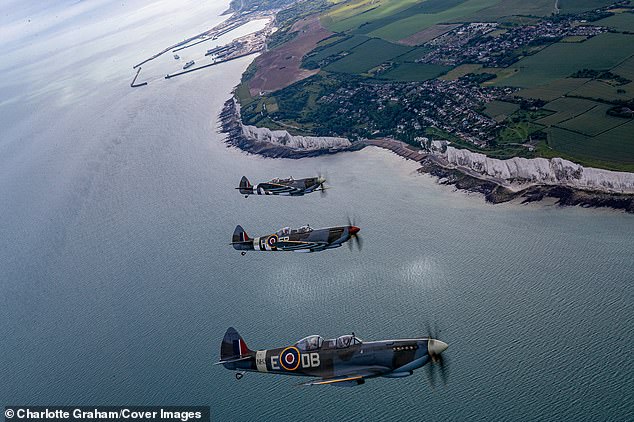 A full flypast of wartime planes will take place tomorrow and Wednesday, with aircraft taking off from Duxford airfield in Cambridgeshire. Pictured are three Spitfires as they fly in formation over the white cliffs on Dover on Sunday

Serving Royal Marines will take part in a public demonstration on board the Royal British Legion’s ship in Poole, Dorset to salute veterans for their service.

It will involve craft weaponry and blank ammunition, ending at 2pm.

At the Imperial War Museum at RAF Duxford in Cambridgeshire on Tuesday there will be a showcase of more than 30 Douglas C-47 Skytrains, also known as Dakotas or Daks.

Parachute jumps and flight displays will wow audiences ahead of the Dakotas taking off from Duxford for France on Wednesday afternoon.

The event will take place from 10am to 6pm on both Tuesday and Wednesday. 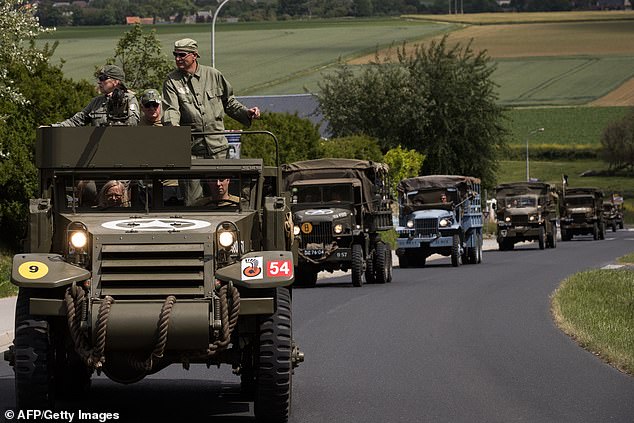 US Army vehicles travel in convoy near Graye-sur-Mer, in Normandy this afternoon as the final preparations take place for this week’s commemorations 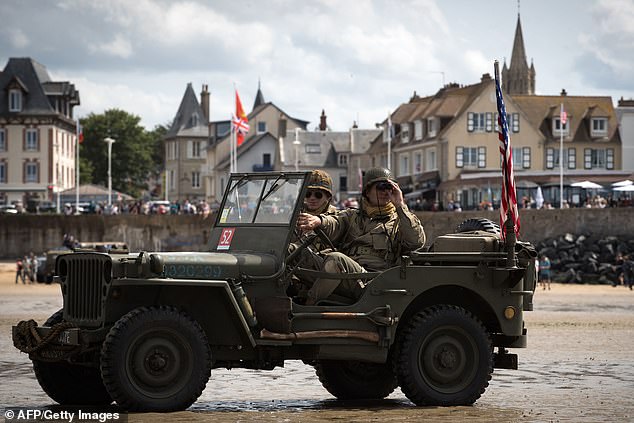 Men dressed as WWII US soldiers get their binoculars out as they park up on the beach at Arromanches-les-Bains, in Normandy in their Jeep

From 11am to 8pm Portsmouth will be taken over by D-Day anniversary events to signify the port city’s major role in the Allied Force’s invasion.

The main commemorative event will begin at Southsea Common attended by both the Queen and President Donald Trump.

Representatives from other allied countries as well as Germany are expected to attend the event at the Portsmouth Naval Memorial involving 4,000 military personnel, 11 Royal Naval vessels and 26 RAF aircraft.

Mr Trump’s attendance has led to a mass security operation and claims his presence will take the focus away from veterans.

A Royal Navy frigate will fire a naval gun salute followed by a flypast of up to 25 historic and modern RAF aircraft, including the Red Arrows and Spitfires.

The Red Arrows will come back for a second air display above Southsea Common.

Around 280 paratroopers, including 130 UK troops and 150 from the French army, will take part in a parachute descent onto fields near Sannerville, in northern France which served as a drop zone for the Allied forces in 1944. A later display involves a tandem jump with D-Day veterans, followed by a re-enactment by 200 parachutists from Douglas C-47 Dakotas, flown over from the UK.

MV Boudicca, the Royal British Legion’s chartered ship will set sail from Portsmouth with more than 300 veterans on board.

It left from Dover on the evening on June 2, taking former servicemen to commemorative events around the south coast before leaving for Normandy.

It will be escorted by a Royal Navy vessel and flotilla and will arrive in time for the main anniversary on Thursday.

Members of the public will be able to see the ship set off from Portsmouth on Wednesday evening from a number of viewing points.

The RAF’s Battle of Britain Memorial Flight will fly over Portsmouth to mark the departure of the Legion’s ship. 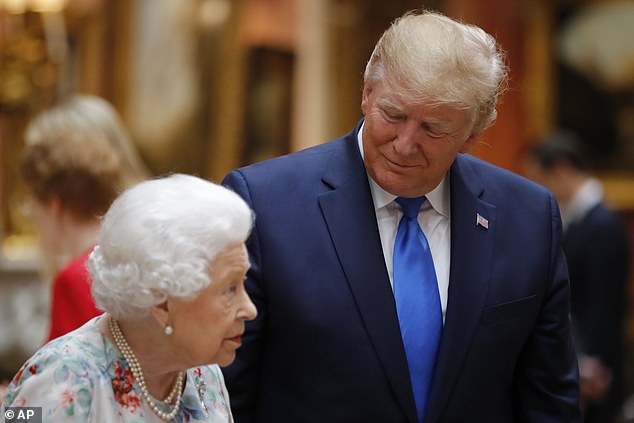 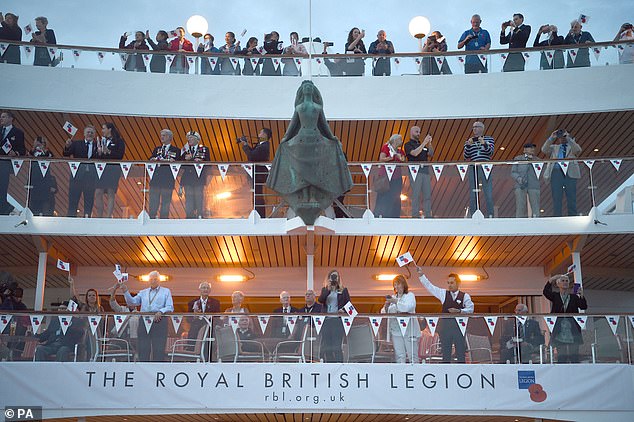 Veterans line the decks of MV Boudicca, which is pictured as it left Dover on Sunday evening

In Arromanches-les-Bains, the Army will mark the exact moment the first British soldier landed on Gold Beach with a piper playing atop a part of the Mulberry harbour. Directly afterwards, a short flag-raising moment will take place involving troops from the Royal Logistic Corps. From 7.45am, vintage military vehicles will be displayed on the beach.

Prime Minister Theresa May and French President Emmanuel Macron will attend the inauguration of the British Normandy Memorial, overlooking Gold Beach at Ver-sur-Mer.

The memorial will honour the more than 22,000 soldiers, sailors, marines and airmen who died fighting under British command during D-Day and the Battle of Normandy.

Theresa May will join the Prince of Wales and Duchess of Cornwall, along with veterans and local residents for the British Legion’s service of remembrance at Bayeux Cathedral.

A service of remembrance will take place at the National Memorial Arboretum in Staffordshire. This will be followed by a small procession to the Normandy Campaign Memorial for a wreath-laying ceremony, and coverage from events in France will be shown on a big screen.

Macron will join US President Donald Trump for a service at the American cemetery at Colleville-sur-Mer.

A second service takes place at the the Bayeux War Cemetery – the largest Commonwealth War Graves Commission site of the Second World War in France – where wreaths will be laid. Prince Charles and Camilla will attend, as will veterans and serving members of the armed forces.

Royal British Legion veterans will arrive in Arromanches from Bayeux to watch parachute displays by the Army’s Red Devils as well as flypasts by the Red Arrows and the Battle of Britain Memorial Flight.

British veterans parade into the square in Arromanches for a series of informal events hosted by the local authority.

Events in Arromanches conclude with a firework display.

Veterans will join schoolchildren and the Bournemouth Symphony Orchestra for a performance of ‘D-Day 75: A Musical Documentary’ at Southsea Common.

The British Legion’s ship will bring 300 veterans back to Portsmouth after their six-day voyage to Normandy. 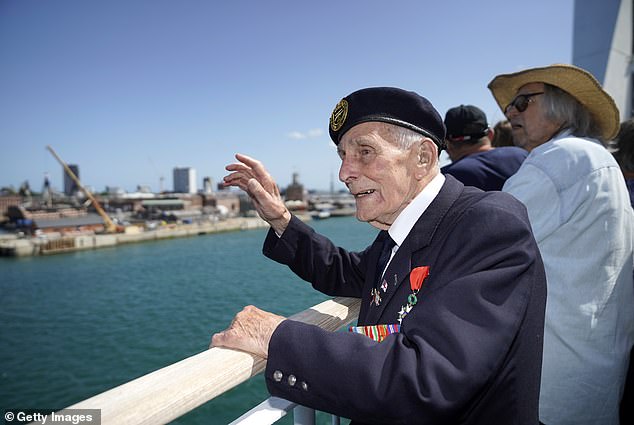 D-Day veteran John Dennett, 94, is pictured waving from the deck of the Mont St Michel, which was escorted by Royal Navy vessels on its way to Caen 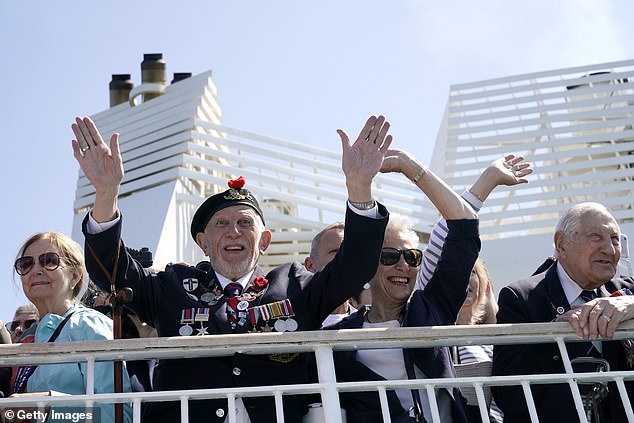 Veteran Joe Cattini, 95, is pictured waving off the Brittany Ferry that set off from Portsmouth this afternoon. He was part of the Hertfordshire Yeomanry and landed on the beach on D-Day